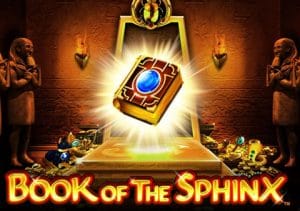 Book of the Sphinx: Demo

WHERE TO PLAY Book of the Sphinx SLOT

Simple, volatile action with an Egyptian flavour is what you’ll find in Book of the Sphinx, yet another ancient-themed video slot from US giant IGT. Look out for the Eye of Ra in the base game which transforms into a new symbol and expands to fill its reels. There’s also a free spins round where even more expanding symbols are in play. Stakes in this high variance game range from between 10p and £100 per spin.

The pharaoh’s burial chamber forms the backdrop to the action in Book of the Sphinx. The reels are made up of the usual assortment of lower value playing card symbols plus potentially more rewarding Egyptian hieroglyphs. The best standard symbol is the pharaoh’s burial mask. Land 3, 4 or 5 of these in combination and you can look forward to a payout of 2.5, 15 or 125 times your bet.

The mystery book is the wild. This replaces all the standard symbols. There are 2 features in Book of the Sphinx.

Eye of Ra feature – land 3 or more of the Eye of Ra symbol on the same spin to activate this bonus. The matching eye of Ra symbols all morph into the same matching symbol. They then expand to fill the whole of the reels and a new payout consideration is made.

Free Spins Bonus feature – the second feature is triggered by landing 3, 4 or 5 of the book wild on the same spin. A payout of 2, 20 or 200 times your bet is made. You’ll then receive 10, 15 or 30 free spins. Before the feature starts, 1 one symbol is picked at random. This can be anything other than the wild.

If you land 3 or more of this symbol on the same free spin, they all expand to fill the whole of their reels. These symbols don’t have to be next to each other to create a winning combination either. Landing 3, 4 or 5 book wilds on the same free spin results in a retrigger and another round of 10, 15 or 30 free spins complete with a special expanding symbol. There’s up to 250 free spins to play in total.

IGT hasn’t exactly re-invented the wheel here. We’ve seen the expanding symbol feature in many other video slots – like Play ‘N Go’s Rich Wilde and the Book of Dead for example. It can be a potentially rewarding one though if you land a high value expander during the Free Spins Bonus feature.

Be warned though, Book of the Sphinx is an extremely volatile game. Expect spells as barren as the Sahara. You can quickly cash in if the feature falls nicely though – up to 2,500 times your bet per spin or free spin. There’s nothing flashy about Book of the Sphinx. If you like straightforward, high variance action with an ancient flavour, then Book of the Sphinx ticks all of those boxes.