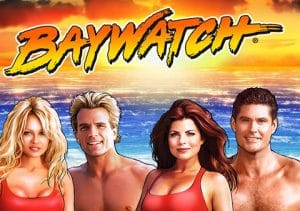 WHERE TO PLAY Baywatch SLOT

The show that made a star of Pamela Anderson gets the video slots treatment. We are of course talking about Baywatch, which is now available as a 5 reel, 15 payline game from IGT. This version comes with Tidal Wilds that can expand both vertically and horizontally, a Teamwork feature where lifeguard symbols combine and a bonus feature that awards up to 24 free spins. Head to the beach, on all devices, from between 25p and £750 per spin.

The beach and sea shore is the setting for Baywatch. The reels are made up of objects related to the show with no playing card filler – you’ll see binoculars, life buoys, trucks, quad bikes and speed boats. The most lucrative symbols are 4 of the central characters from the show – Cody, Caroline, CJ and Mitch. Mitch and CJ are the most rewarding, paying 100 coins if you land 5 on a payline.

These lifeguard symbols can combine courtesy of the Teamwork feature – if you land a winner that is made up of combined symbols, enhanced rewards of up to 25 coins per payline are on offer.

Keep a special eye out for the wild on reels 2, 3 and 4- when the Tidal Wave feature hits, the wild can expand and turn the whole of that reel wild. It can also expand horizontally and turn 2 other reels wild. This could mean a giant 3 reel block of wilds can hit.

The other main extra on offer in Baywatch is a Free Spins Bonus feature which is triggered by landing 3 bonus symbols on the same spin. Choose 1 male and 1 female lifeguard to determine how many free spins you’ll receive.

Choose Mitch or CJ and you’ll get fewer free spins overall but their symbol will spin 2-high. Opt for Cody or Caroline and more free spins (but no expanded symbols) are on offer. You can combine the 2 if you wish. Between 6 and 24 free spins are on offer here. The Teamwork feature is in play throughout the free spins, with enhanced payouts to match.

With all the lifeguards on hand, you wouldn’t expect the waters in Baywatch to be especially choppy. That’s the case for your bankroll here. The variance is in the low to medium range with maximum wins of 150 times your bet on each spin.

We still can’t quite understand how Baywatch became the most popular TV in the world. It’s a similar story with the video slot version. It’s not bad, just not especially brilliant. The visuals are done cartoon style and aren’t particularly impressive. We can recognise all the characters at least which we can’t say of some high-profile adaptations. The soundtrack bounces along and you’ll hear the famous Baywatch theme as you spin.

If you’re a fan of Pammie, the Hoff or the show then by all means jump into these waters. If you didn’t really see the attraction of the original Baywatch, this video slot version is unlikely to win you over. All in all, there are better branded titles out there with Microgaming’s Jurassic World and NetEnt’s Planet of the Apes recommended.