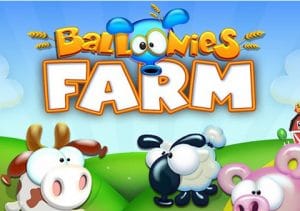 WHERE TO PLAY Balloonies Farm SLOT

Trying to float away with a jackpot is the name of the game in Balloonies Farm, a 5 reel, 20 payline video slot from IGT. Balloon animals are the stars of this farmyard yarn which comes with floating reel re-spins, wild multipliers and a free spins feature. Stakes range from between 20p and £2,000 per spin.

This is the second outing for the Balloonies gang and both the design and gameplay are similar to the original. A cartoon farmyard forms the backdrop to the reels which include balloon style A, K and Q as well as cows, sheep and pigs. Just like the first Balloonies, the strange blue alien is the most rewarding symbol. Land 5 of these on a payline and you’ll pocket a 1,000 coin payout.

The star-shaped balloon is the game’s wild – it only appears on reels 2, 3 and 4 and substitutes for all other symbols with the exception of the bonus. The wild doesn’t offer any specific pays but can boost your payouts with some chunky multipliers.

When the wild is part of a winning payline, it will boost the payout with a 2x, 3x or 5x multiplier. Better still is if there are more than 1 star as the multipliers are combined. You could end up getting a 10x boost if the stars align. This is known as the Star Multiplier feature.

You’ll notice that Balloonies Farm is played using a Floating Reels feature – symbols float upwards into position. When a winning combination is formed, the successful symbol are popped and replaced by new ones from below. A new calculation is made with the new symbols in place. These keep on coming as long as a new winner is created.

There is also a Free Spins Bonus feature on offer at Balloonies Farm – to trigger them, you’ll need to land 3 of the red balloon bonus. As well as a payout of double your stake you’ll be given the pick of 4 free spin and multiplier combinations:

The star multiplier hits more regularly in the free spins than in the base game – the multipliers can again be combined too. Unfortunately, it’s not possible to add any extra free spins to your tally but the floating reels offer plenty of potential.

If you enjoyed the original Balloonies game, then expect more of the same from Balloonies Farm. The theme may be a bit silly but a trip to this cartoon cast can deliver some serious rewards thanks to the potentially big multipliers. If you like barnyard animals, NetEnt’s Tornado Farm Escape is recommended.