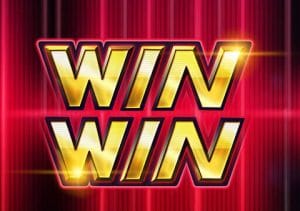 WHERE TO PLAY Win Win SLOT

Win Win is the fifth release in ELK Studios’ classic series. It’s a 3 reel, 3 row, 17 payline video slot that comes with some cracking gameplay. Landing a winner on the special golden payline can deliver some top extras. Look out too for locked reel respins and a free spins round where multipliers of between 2x and 10x are in play. Play on all devices from between 20p and £100 per spin.

The setup in Win Win is straightforward. The action takes place on an old school, 3 reel fruit machine. On the reels you’ll see cherries, lemons, melons, single, double and treble bars and green, blue and red lucky 7s. The red lucky 7s symbols is the best standard win, delivering 15 times your bet if you land 3 on 1 of the game’s 17 paylines.

There’s the potential for much bigger payouts though if you land special combination on the golden payline. Known as the Win Symbol feature, this stretches horizontally on the middle row.

If you’re lucky enough to land Win symbols on the Golden Payline on reels 1 and 3, the symbol in the middle gets a 10x multiplier boost.

Locked Reel Respins feature – these are triggered if you land identical stacks of symbols on reels 1 and 3. These outer reels lock in place and the middle reel spins 3 times.

Bonus Game feature – this is triggered by landing 3 Bonus symbols anywhere on the reels on the same spin or a combination of Win and Bonus symbols on the golden payline. The round starts with a random multiplier of 2x, 4x, 6x, 8x or 10x.

Win Win might look like a very simple fruit machine. In fact, there’s loads going on here. That variety of gameplay makes this a very entertaining video slot. It’s pretty volatile too with the variance in the medium to high range – you can win 5,000 times your bet with the 10x multiplier!

We’ve seen plenty of fruit machine reboots. This is one of the better ones combining classic design with some fresh features. If you like an old school blast, then give Win Win a look. ELK Studios have created many great games – Sam on the Beach is 1 of my favourites.