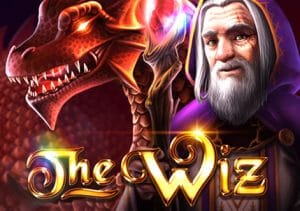 WHERE TO PLAY The Wiz SLOT

Enter a magical realm full of potions, sorcerers and dragons in The Wiz. This 5 reel, 178 ways to win video slot comes from ELK Studios and features multiplier wilds that boost payouts by between 2x and 5x. The bonus round offers infinite free spins played on reels that include only higher value symbols. Look out too for the walking multiplier wilds that shift across the reels. Play on all devices from between 20p and £100 per spin.

There’s a mediaeval feel to the design here. The reels are set against a backdrop that’s dominated by a mighty castle. You’ll also see a dragon and a rainbow. As we’ve come to expect from an ELK Studios production, it’s all very tastefully put together. On the reels you’ll see lower value spoons, keys, bottles of potions and treasure chests. They’re joined by rings, amulets and the man in the moon. The sun god is the most lucrative symbol. A payout of 2.5, 5 or 10 times your total bet awaits if you manage to find 3, 4 or 5 of them on adjoining reels.

Helping move things along is the mighty red dragon which is the wild. This substitutes for all other symbols apart from the bonus. The wild also comes with a multiplier attached. This can boost payouts by 2x, 3x, 4x or 5x with the Wild Multiplier feature.

The title character appears on the bonus symbol. Land 2, 3, 4 or 5 of these anywhere on the reels on the same spin and you’ll conjure up the Wizspins Bonus Game feature – on offer here are 1, 5, 7 or 10 free spins. During these free spins, all of the lower value symbols turn into their higher value equivalent.

The wild dragon gains even more magical powers here too. It turns into a walking multiplier wild, shifting 1 reel to the left with each spin until it drops off the screen – this is known as the Walking Wild feature. Re-triggers are possible here too which can add even more free spins to your tally.

ELK Studios video slots are usually well designed and that’s true of The Wiz. It’s not from the absolute top drawer but the sound and visuals are more than adequate. The setup is especially good if you’re using a mobile device. There’s nothing overly complex about the gameplay here. The multiplier wilds are central to the action here. The multiplier values from the dragons can give you payouts of 5,000 times your bet on every spin/free spin.

The sorcery theme remains a popular one and The Wiz is a perfectly solid addition. Get lucky with those wild dragons and you could fly off with plenty of treasure. If it’s sorcery you’re after, I highly recommend Playtech’s Raiders of the Hidden Realm which is excellent.