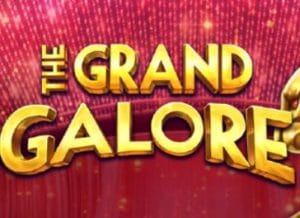 WHERE TO PLAY The Grand Galore SLOT

Enjoy a slice of luxurious living in The Grand Galore slot, an opulently designed game from ELK Studios that dripping in ornate design. The action takes place on a 6-reel machine where expanding reels mean the number of ways to win can reach up to 1,000,000. Look out too for synced respins that can get between 2 and 5 reels spinning in unison as well as a Bonus Game feature that awards up to 50 free spins. On every 5th win, you can look forward to a Grand Synced respin on expanded reels. Find out more this high variance slot in our detailed The Grand Galore review.

The base game engine in The Grand Galore slot is a 6 reel, 4 row setup that offers 4,096 ways to win. Winners are created by landing matching symbols or wilds on adjoining reels, starting from reel 1.

You can play The Grand Galore at bet levels of between 20p and £100 per spin. Click on the pile of coins in the bottom left corner of the screen and adjust accordingly. Hit the Auto button and you can run 10, 25, 50 or 100 autospins. There aren’t any options for win, loss or feature stop limits. You can run the game in quickspin mode if required though. Head to the setting tab to set this up.

The Grand Galore RTP is 96% which is about average. The variance here is in the high range. If we were to rate the volatility, we’d score it at around 8 out of 10. With a hit rate of 22.9%, you can expect a win in nearly a quarter of spins. The max payout is high at 10,000 x bet per spin.

As befits a slot called The Grand Galore, there’s a rich opulent feel to the design here. There’s a jazzy backing track playing in the background while you spin. It’s rather bland but not overly intrusive. Overall, the simple but luxurious design works well.

The reels are made up of lower value A to J royals as well as 4 brightly coloured gemstone symbols. The most rewarding standard symbol is the gold jewel-encrusted big cat. Land 3, 4, 5 or 6 of these in combination and you’ll receive an award of 2, 4, 6 or 10 x your total bet.

There’s also a wild, the golden W. This doesn’t offer any payouts but it does replace all the standard symbols when it makes up part of a winning combination.

The Grand Galore has been fully optimised for use on all devices including computer, tablet and mobile. The glossy design and simple gameplay work solidly enough on the smaller handsets.

The gameplay in The Grand Galore slot is a little unusual. The action revolves around expanding reels which increase the potential number of ways to win. There are also synced reels to consider as well as a free spins feature where the synced reels can really come into their own. We’ll start by looking at the Expanding Reel Respins.

As described above, you begin playing with 6 reels, 4 rows and 4,096 ways to win. Each time you land a winner, you’ll trigger the Expanding Reel Respin feature.

All the reels which made up part of the winning position have 1 extra symbol added to them. The original winning symbols and the newly opened positions spin again. If a new winning combination is formed, the process is repeated. Re-spinning symbols next to each other on a reel will reveal the same symbol.

Adding more rows to each reel brings extra ways to win into play. Each reel can expand so that it is 10 rows high. Fully expanded, the game grid offers 1,000,000 ways to win.

Randomly, the Synced Respin feature can become active. Between 2 and 5 reels can synchronise. These will then all reveal the same matching symbol. This feature can trigger at random on any respin.

The Grand Galore slot also comes with a Bonus Game feature. It’s triggered in the usual manner by landing 3 or more diamond bonus symbols anywhere on the reels on the same spin. You’ll then get between 10 and 25 free spins:

Land a winner during the free spins and it’s recorded in a meter. After 5 wins, you’ll trigger the Grand Respin feature where you’ll be awarded a respin on expanded reels:

Like in the base game, all reels can expand to have 10 rows each. All expanded reels will lead to 1 million ways to win. You can also land bonus symbols to give you more free spins and up to 50 altogether.

The rich design in The Grand Galore slot is nicely done. The gameplay stacks up pretty well too. The features aren’t overly complex but they can deliver some big rewards.

Get on a run with the respins and you could end up with a huge number of ways to win active. The maximum payout here is a massive 10,000 x your total bet which is much higher than in other ELK Studios slots. This is a volatile game though, so proceed with caution.

You’ll find plenty of other slots with a wider variety of extras. Simplicity works nicely in The Grand Galore though. If you want a million ways to win, the Spartacus Megaways slot from WMS offers it.

What is The Grand Galore RTP?

The Grand Galore return to player rate is 96% which is average for a slot game. Highly volatile, big wins will be few and far between. It offers a 22.9% hit frequency meaning nearly a quarter of spins will give you a win.

What is The Grand Galore maximum win?

The most you can win from a single spin in The Grand Galore is 10,000 x your total bet. The key to winning big is my expanding each reel to 10 rows which will give you 1 million ways to win.

Are there any The Grand Galore free spins?

Yes, trigger the Bonus Game feature and you can play up to 50 free spins in total. Boosting your chances here are Grand Synced Respins where multiple reels display matching symbols and the number of ways to win increases.

How do you play with 1 million ways to win?

When you get a win, 1 extra symbol is added on winning reels. The process continues until no more new wins are formed. Known as the Expanding Reel Respin feature, each reel can have 10 rows which will give you 1 million ways to win.