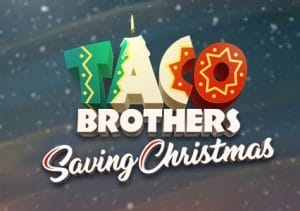 ELK Studios is wishing online casino players ‘Feliz Navidad’ courtesy of its 5 reel, 243 ways to win, Mexican-themed Taco Brothers Saving Christmas video slot. This second outing for Pepe, Pico and Paco is full of festive cheer including wild re-spins and a free spins round with sliding wilds. Head to Santa Maria from between 10p and £50 per spin.

Just like the original, the Taco brothers are trying to protect their town from baddie Captain Diaz – it contains the same high class design standards as the first outing with an added festive twist or 2 thrown in for good measure. Instead of a dusty town forming the backdrop to the reels, it’s an unlikely snowstorm that backs the action. Look out too for cactus plants draped with fairy lights, guitars wrapped in tinsel and Sombreros making way for Santa hats.

The same range of features that made the first Taco Brothers so popular are present and correct in this holiday-themed sequel. Land 2 Taco Brothers on the even numbered reels on the same spin and you’ll trigger the Taco Brothers Respin feature where you are awarded a respin. Basically, it gives you a second crack at landing 3 safes (more below).

Free spins are on offer in Taco Brothers Saving Christmas too via the Wild Escape Bonus feature – to trigger the feature, you’ll need to land the safe scatter symbol on reels 1, 3 and 5 on the same spin. There are couple of wrinkles to help you on your way during the feature. Firstly, multipliers are on offer which can treble your payouts.

Look out too for the Running Wild feature – Pepe, Pico and Paco all land on reel 5 one at a time and move 1 position to the left with each free spin. Watch out for the dastardly Captain Diaz who can stop the brothers in their tracks and freeze them behind bars.

Helping the brothers is the Señorita who can release the brothers from the clutches of Diaz and resume their wild abilities – she can also add extra free spins to your total. The free spins continue until all the brothers are behind bars or the trio have made their escape.

If you’re a fan of the first Taco Brothers video slot, you may well be wondering, bar the odd visual flourish, if there’s anything new in the sequel – the answer is yes. This is a far more volatile game than the original with the variance in the high bracket. Expect less action in the base game and be prepared for some explosive thrills in the feature instead.

Taco Brothers Saving Christmas is a fine follow up, especially given the added volatility – itt may not be the traditional way to celebrate Christmas but we can think of worse ways to escape the in-laws than spending a few hours with these Mexican chancers.