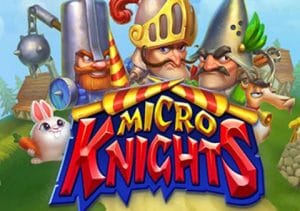 WHERE TO PLAY Micro Knights SLOT

Join a band of tiny warriors on a quest for medieval riches in the rather bizarre Micro Knights. More social media game that classic slot, this release from ELK Studios is played using a 7×7 tumbling reels grid. Fill the meter with symbols to activate 1 of 6 modifier features. Watch as knights push symbols into the Queue which can boost the number of symbols in your winning clusters on the grid. Stakes here range from between 20p and £100 per spin.

Like most slots from ELK Studios, plenty of effort been put into the design of the Micro Knights slot. Set against a woodland backdrop, you’ll see ham hocks, a well, an archery target, toad stool, rabbit, frog, goat and ox symbols on the reels. To create a winning combination, you’ll need to land 5 or more matching symbols in a vertical and/or horizontal cluster.

Top of the payers is the ox which will get you 250 x your total bet if you land a cluster of 20 or more. The gold goblet is the wild.

Micro Knights uses a symbol drop game engine. Land a winner and the symbols are removed and new ones replace them. These are added to a meter. More on this shortly. First, though, you’ll need to get your head around the Queue.

You’ll notice that the symbols in the Queue come with number attached. If you land a winning combination on the grid and the same symbol is in the Queue, the values are combined.

For example, say you had a 6 symbol cluster of the ox on the grid and an Ox with a 3 attached in the Queue, the value of your win would be 9 symbols. Look out for the Smashing Knight who can also appear at random and boost the value of symbols in the Queue.

To the side of the reels you’ll see a meter. The symbols from each winning cluster are added to the meter. If you fill the meter during a single set of drops, you’ll be awarded a modifier:

The Free Drops Bonus feature is triggered by landing 3 scatters on the same spin. You’ll then receive 5 free spins. The Queue is in play throughout the free spins which can give your winning chances a timely leg up. Landing 3 scatters results in a re-trigger – so up to 10 free spins in total.

The Micro Knights slot game looks simple enough at first glance but there’s plenty going on here. If possible, have a few spins in demo mode to get accustomed to the rather unusual gameplay and the Queue element. It should quickly make sense.

Basically, you can add symbols to the queue which lead to bigger winning clusters and bigger wins. Medium to high variance, you can win up to 2,500 x bet on each spin or free spin. The bigger wins should come from the Super Size feature as you’ll land 16 of the same symbol in 1 go.

If you’re a fan of classic fruit machines, then this will be one to swerve. The rather strange gameplay isn’t for all tastes. If you fancy something different though, then join the Micro Knights. ELK Studios have produced plenty of interesting and innovative slots – their best games are the award-winning Wild Toro and the high variance Sam on the Beach.