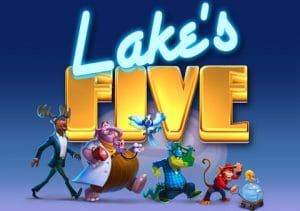 WHERE TO PLAY Lakes Five SLOT

Join a gang of dapper animal buddies trying to take down the evil Mr Romano in Lake’s 5, an Ocean 11’s style heist-themed video slot from ELK Studios. Played using a 5 reel, 178 ways to win game engine, it comes with free spins with walking, sticky and climbing wilds which can combine and turn into multiplier wilds. You’ll also find respins with moving wilds. Play on all devices from between 20p and £100 per spin.

As usual for an ELK Studios-powered game, the design here is impressively done. A city skyline, dominated by Romano Towers, forms the backdrop to the reels. There you’ll see gang leader Lake (the moose) and his chums. They include goldfish, monkey, crocodile, bird and elephant characters – the goldish pays 50 times your bet for 5 across a payline.

Mr Lake is the game’s wild and substitutes for all other symbols except the Bonus scatter. Land 3 scatters on the same spin to unlock The Heist Bonus Game feature. The back story here is that the animal companions are trying to rescue a kidnapped monkey from Mr Romano.

What you really need to know is that the feature comes with plenty of wild extras that unlock by collecting key symbols. Collect 3 of them on a single reel and you’ll receive a wild modifier. Reel 1 awards walking wilds, reel 3 offers sticky wilds and reel 5 climbing wilds.

The second extra, the Respins feature, is activated by landing 2 scatters on the same spin. Those scatters then turn into wilds. The reels featuring the wilds drop down 1 position as the other reels respin. The respins continue until there’s a single scatter remaining or you’ve managed to land The Heist Bonus Game feature.

Cute animal adventurers might fool you into thinking that Lake’s Five is a gentle video slot as far as variance goes. In fact, it’s just the opposite. This is a volatile game with payouts of 2,160 times your total bet on each free spin (involving a 3x multiplier wild).

As usual for an ELK Studios video slot, you’ll find classy design. That’s especially the case if you’re playing on a mobile device. The range of extras is decent enough too and offers plenty of potential. The back story is slightly surreal but all the wild extras in the bonus features male Lake’s Five worth a look. I also suggest you take a look at the volatile Sam on the Beach which has plenty of bonus features.