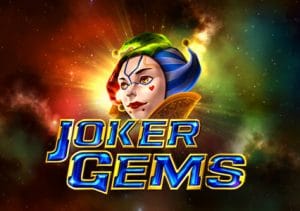 WHERE TO PLAY Joker Gems SLOT

Blast off into space and go hunting for interstellar treasure in Joker Gems. This unusual game is played on a 5×5 grid with winning combinations created by landing clusters of 3 or more symbols. Look out for re-spins and Light Chasers that create winning combinations. There are also bronze, silver and gold jackpots with prizes of up to £50,000 on offer. Play on your PC, tablet or mobile from between 20p and £100 per spin.

It might sound like a classic fruit machine but there’s a space age look to the design here. With the beautiful shades of a nebula in the background, you’ll see plenty 4 colourful gemstones spinning around the reels as well as a bar and lucky 7. The top symbol is the female joker.

To create a winner, you’ll need to land 3 or more of the same symbol in a cluster. These symbols are then held and a re-spin is awarded. If a new matching symbol joins the winning cluster, the process is repeated and another re-spin awarded. These continue until there’s a re-spin where no new winner lands.

Look out for the beam which can fly across the reels between spins. This so-called Light Chaser creates a guaranteed winning cluster of 4 or 5 symbols – this is simply called the Light Chaser feature.

Big money is on offer from the bronze, silver and gold jackpots. These are triggered by landing matching symbols in a special configuration:

As you’d expect from a video slot from ELK Studios, the design here is impressive. There’s a futuristic feel to the visuals which is matched by the ambient soundtrack. Joker Gems isn’t overloaded with features but the re-spins and sticky symbols mean there’s no shortage of action.

This is a high variance game though. There’ll be spells when your bankroll floats away into the ether. Get on a re-spin roll and the results can be impressive. You can win 700 times your bet on every spin but landing the £50,000 jackpot (which is fixed by the way) could lead to a nice payday.

We expected a classic fruity when we opened up Joker Gems. It offers more than that though. If you like simple, volatile, hypnotic play, that’s not a million miles away from the ever-popular Starburst, then Joker Gems is well worth a try.