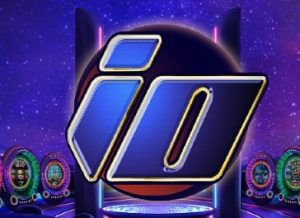 WHERE TO PLAY IO SLOT

Blast off into deep space and set a course for Jupiter in the IO slot. Named after one of the giant planet’s moons, IO is a sci-fi-themed slot from ELK Studios. The base game starts on a 6 reel, 4 row machine that offers 4,096 ways to win. Successive avalanche wins add rows to the game engine and increase the ways to win. These can reach up to 262,144 ways to win. In our detailed IO review, you’ll discover avalanche reels, standard and charged wilds that remain live for 4 wins, multiplier wilds and lasers that can turn multiple symbols wild. Trigger the bonus round for free spins on fully expanded reels where special wilds are collected at the bottom of the reels to boost your winning chances.

The IO slot starts on a 6 reel, 4 row machine that has 4,096 ways to win. Winning combinations are formed by landing 3 or more matching symbols on adjoining reels, starting from reel 1. It uses an Avalanche feature which is described in more detail below.

You can play at stakes that range from between 20p and £100 per spin. To activate autoplay mode click and hold on the spin button or click on the auto tab in the top right-hand corner of the screen. You can set up to 100 autospins.

This trip deep into the Solar System comes with plenty of extras. Wilds are the key to many of them, both in the base game and the feature. We’ll start by looking at the game engine and the avalanche reels.

After a winner is formed, an avalanche takes place. The successful symbols are removed from play and new ones drop down and replace them. A new payout consideration follows. These avalanches continue if a new winning grouping is formed.

Each successive avalanche adds an extra row to the machine. This also increases the number of ways to win. The machine can reach up to 8 rows high. If that happens, you’ll have 262,144 ways to create winner:

If you don’t get a winning combination, the number of rows reverts back to 4 with 4,096 ways to win.

Some wilds will appear with what looks like an energy field around them. These are charged wilds. When an avalanche is created, the charged wilds aren’t removed from the reels. They remain active for 4 wins. Only then do they disappear.

These are blocker symbols that can fill empty spaces below a symbol. They come with a multiplier value that starts at 2x. This multiplier increases each time the Wild Forge drops to a new position, becoming a multiplier wild when it reaches the bottom of the screen. These can boost payouts by up to 20x.

The Bonus Game feature is triggered by landing bonus scatter symbols on the same spin. You’ll then receive 7 free spins on a fully expanded set of reels that offers 262,144 ways to win. Retriggers are possible here too.

More importantly, any charged wilds or wild forge symbols fall left or right but remain active for the drop that follows. This increases your chances of winning and benefiting from multipliers. The view from the bridge of a spacecraft sets the scene for the IO slot. In the background you’ll see shimmering stars and the planet moon itself.

The circular symbols drop into place rather than spin. You’ll see A to J royals as well as futuristic star, clover, diamond and 7 symbols. The lucky 7 is the best standard symbol, paying 5 x your bet if you land 6 in combination. The W is the game’s standard wild. This substitutes for all the standard symbols. There are plenty of other wilds active here that can have a big impact too.

The visuals are very bright and colourful and stand out nicely against the space backdrop. We expected a Kraftwerk-style soundtrack but the music is actually rather sparse bar the occasional bang and bleep. IO is available on all devices including mobile and tablet. It works perfectly well on smaller screen devices.

We enjoyed this galactic adventure. The wild extras are a little unusual but they can deliver plenty of action, especially in combination with the avalanche reels game engine.

The free spins round offers some very decent potential too due to the wild forge and charged wilds falling to the bottom after each free spin. The design isn’t as flashy as it might have been but we’re usually in safe hands on that score with ELK Studios they’ve come up trumps again here.

Put the gameplay, design and high volatility together and this virtual trip to Io is recommended. The mechanic can also be found in the Cygnus slot which has an ancient Egyptian theme. If it’s outer space you want, the simpler Starburst slot from NetEnt is a good place to start.

The IO return to player rate is 96% which is pretty standard. On average, for every £100 wagered on Io, £96 is returned via the prize pool. Things can swing significantly as it’s a medium to high variance slot. The bigger wins will come from the multipliers created by the Wild Forge symbols.

🥇 What is the IO maximum payout?

If you manage to bag the perfect combination, the top payout in IO is 5,000 x your total bet. Whilst this can be won on any spin, your chances improve in the Bonus Game feature due to wild forge and charged wilds falling to the bottom of the reels after every free spin.

🎰 Is there an IO mobile slot?

Yes, IO is available to play on all sorts of devices including desktops, laptops, tablets and mobiles. The combination of classy visuals, exciting and varied features and volatile gameplay make this space adventure an appealing one.

⚡ What is the Avalanche feature?

When you get a winning combination, the Avalanche feature kicks in. The number of rows and ways to win increases with each avalanche. Every extra row adds more ways to win. At a maximum, you can benefit from 8 rows which will give you 262,144 ways to win in total.