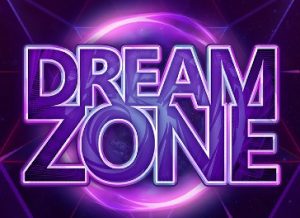 WHERE TO PLAY Dreamzone SLOT

Drift into the Dreamzone slot, a hypnotic cluster pays game from ELK Studios that combines futuristic sound and visuals with some top extras. Land clusters of matching symbols to create a winning combination. Boost your chances courtesy of special dream features which award up to 5 extra wilds, scatter payouts, symbol upgrades and exploding symbols which create new symbol drops. In our Dreamzone review, you’ll also find out about the Bonus Drops feature which starts with a 2x multiplier active but can eventually send payouts rocketing by up to 512x. Let’s take a closer look.

The action in the Dreamzone slot takes place on a 5×5 reel grid. To create a winning combination, you need to land a cluster of 3 or more matching symbols. Basically, it’s a Cluster Pays slot.

Dreamzone is available to play at all stake levels. Bets start at 20p per spin, rising to a maximum of £100. There’s an Auto Spin facility where you can choose up to 100 auto spins. If you want to spin the reels faster, there’s a Quick Play option in the settings. There’s also a reality check interval where you can stop auto play after a chosen amount of time.

The hit rate is 27.7% so you can expect to land a winning combination just over a quarter of the time. The maximum payout is 2,500 x your total bet with the Bonus Drops feature giving you the chance to do so due to the potential 512x multiplier on offer. There’s a futuristic feel to the design in Dreamzone. There’s a bouncy, electronic backing track playing in the background while you spin which matches the rather repetitive gameplay rather well. It certainly gives Dreamzone plenty of energy.

Set against a dark backdrop, the reel grid is made up of 10 brightly coloured symbols. There are 5 lower value crystal style symbols in purple, blue, green, amber and red. Each of these has a higher value equivalent of the same colour. The most rewarding symbol is the red gemstone which pays 100 x bet for 11 or more in a cluster.

The W symbol is the wild which performs the usual substituting duties. The imagery is all super sharp and lovely and clear.

Dreamzone is optimised for play on a mobile device as ELK Studios is a mobile-first developer. You can play it using a desktop or tablet device too. It looks great on whatever device you choose.

Cluster pays and avalanches are the bread and butter of the Dreamzone slot. ELK Studios has embellished this standard format with some pretty tasty extras that can certainly spice things up. There’s also a free drops round where potentially big multipliers can come into play.

When a winning cluster is formed an avalanche takes place. Those successful symbols are removed from play and new symbols drop down and replace them. A new payout consideration then follows. If those create a new winner, the process is repeated.

Boosting your winning chances are special Dream Features. These are collected during winning symbol drops and can be used when there’s no winner on show to keep an avalanche going. They can award the following extras:

You can collect up to 5 Dream features which can be used in the same avalanche.

If you manage to clear the whole of the grid of symbols, you’ll trigger the Bonus Drops feature. You’ll then be given 3 free spins/drops to try and clear the grid and level up.

We enjoyed the Dreamzone slot. The cluster pays, avalanche reels gameplay could have been a bit too repetitive but ELK Studios has revved things up rather nicely with the addition of the Dream features which can certainly get things moving.

The Bonus Drops feature offers some decent opportunities too thanks to the expanding multipliers which increase each time you level up. With potential boosts of up to 512x, this round can pay out big on 1 lucky free spin.

Dreamzone might suggest something rather tranquil but there’s enough volatility here to keep things ticking over rather nicely. If you’re look for a slot that offers a huge variety of bonuses and features, this probably won’t be for you. For straightforward, well designed, cluster pays action, you won’t go too far wrong with Dreamzone.

What is the Dreamzone RTP?

The Dreamzone return to player rate is 96% which is about average. The hit rate is 27.7% so you can expect to land a winner just over a quarter of the time on average. The maximum payout stands at some 2,500x.

Is Dreamzone a volatile slot?

A slot called Dreamzone suggests a rather sleep, gentle game. That’s not really the case though. The Dreamzone variance is on the high side of medium. On a scale of 1 to 10 we’d put the Dreamzone volatility at around a 7.

Does Dreamzone come with free spins?

Yes, you’ll trigger the Bonus Drops feature and 3 free spins when you manage to clear the whole of the 5×5 reel grid of symbols. If you clear a grid, you’ll level up. This brings multipliers into play. These start at 2x and double each time you reach a new level – up to 512x. You’ll also get more free spins each time with 27 available.

How does Cluster Pays work?

As its name suggests, winning combinations in a cluster pays slot are created by landing a cluster of 3 or more matching symbols. In Dreamzone, an avalanche follows a win. The successful symbols are removed. Look out too for the Dream features which can add extra wilds, symbol upgrades, symbol explosions and scatter pays which can keep an avalanche going.