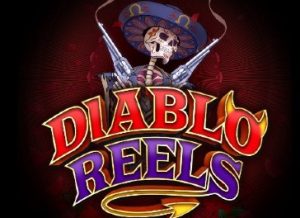 WHERE TO PLAY Diablo Reels SLOT

The devil has all the best tunes but what about slots? Old Nick takes centre stage in the 3 reel Diablo Reels slot from ELK Studios. Highlights of this virtual trip to hell include respins, stacked wilds, nudging multiplier wilds of up to 5x and a bonus round that awards 10 free spins that are played on an expanded set of reels. Part of ELK’s Classic Series, there an old school feel to the look and sound of this devilish slot which offers payouts of up to 2,500 x bet. Found out how it all stacks up in our in-depth Diablo Reels review.

The base game action in the Diablo Reels slot takes place on a 3 reel, 3 row grid that offers 5 paylines. So far, so standard. You’ll see another set of 3 reels above the main set. These can open up when you trigger the game’s features.

Bet levels start at 20p per spin, rising to a maximum of £100 per spin. There are plenty of options available for autoplay too.

A devilish theme usually means fiery gameplay and that’s certainly the case with Diablo Reels. The volatility isn’t quite scorching hot but Diablo Reels is a volatile slot. On a scale of 1 to 10, we’d put the volatility is 8 out of 10. The Diablo Reels return to player rate stacks up pretty well at a slightly above average 96.3% RTP.

You can expect to land a winning spin around once every 5 spins (18.1% hit frequency). The Diablo Reels maximum win from a single spin is 2,500 x your total bet. With its 3 reel game engine and rather retro design, there’s an old school feel to the Diablo Reels slot. That’s no surprise given it’s part of ELK’s Classic Series.  The symbols are very simply draw and could come straight from a slot machine from a brick and mortar casino. It’s bright, bold, in your face and very nicely done.

With the flames of hell billowing away in the background, the plain white reels are made up of an assortment of chillies, lucky red 7s, bars, limes, watermelons, horseshoes, gold bells and diamonds. The shiny gemstone tops the payouts, awarding 50 x your bet if you land 3 on a payline. That same amount is on offer from the wilds.

ELK Studios has created a fully optimised Diablo Reels mobile slot. The simple design and 3 reel gameplay make it well suited to play on a small screen device. You’ll have no problems playing on your mobile.

In the Diablo Reels slot, wilds are the key to success. There are 2 different types of wild: Stacked and Nudging. The latter come with potential multipliers. The other extra is the free spins feature.

As well as a standard wild, you’ll see a second wild symbol that comes with a gold arrow attached. This is the nudging wild. Whenever a nudging wild hit, the reel nudges upwards, awarding a series of respins until it leaves the screen at the top. Nudging wilds that reach the top of a reel can come with 2x or 5x multipliers attached. It’s possible to land more than 1 multiplier wild. The values are combined when this happens.

If you land a stacked wild and nudging wild on the same spin, you’re in line for even more goodies. The stacked wild turns into a sticky wild which can really give your winning opportunities a leg up. Land 3 skull bonus symbols on the same spin and you’ll activate the Bonus Game feature. Your reward here is 10 free spins which are played across the 2 sets of reels. During the free spins, the top set of reels is made up of higher value symbols only. All the lower value symbols are removed for the duration.

Despite its old school roots, there’s a fresh, modern look to the Diablo Reels slot. The gameplay stacks up pretty well too, taking a couple of classic features and shaking them up to entertaining effect.

Diablo Reels is volatile enough to keep things interesting too. Put all that together and you have another very playable addition to ELK’s popular Classic Series of slots. If you prefer more modern slots, the Cygnus slot by ELK Studios is a perfect fit.

What is the Diablo Reels RTP?

The Diablo Reels return to player rate is 96.3%. That’s a slightly better than average return rate. However, and as you might expect from a slot with a devilish theme, the action here is pretty fiery. The Diablo Reels volatility is in the high category.

What is the Diablo Reels max jackpot?

The most you can win from a single spin in Diablo Reels is 2,500 x your total bet. Your chances increase in the Bonus Game feature due to no low value symbols, sticky wilds and 10 paylines.

Is there a Diablo Reels mobile slot?

Yes, ELK Studios is one of the best developers around when it comes with slots for handheld devices. You can play Diablo Reels on iOS, Android and Windows devices.

Are they any other Diablo Reels bonus features?

Yes, aside from the Bonus Game feature, you have stacked wilds which gives you a respin with expanded reels. There’s also nudging wilds which nudge upwards with each respin. When they reach the top of a reel, they have multipliers up to 5x. Stacked and nudging wilds can also combine in the free spins for sticky wilds.