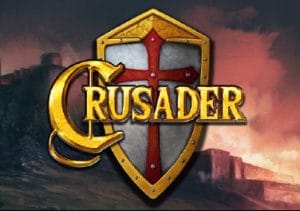 WHERE TO PLAY Crusader SLOT

Join the knights of the Middle Ages, trying to life the siege of Acre and defeat an army of Mamluks in the Crusader slot. This historical epic has been created by ELK Studios and comes with the developer’s usual high spec design. There’s some innovative gameplay on offer here too in the form of Crusader wilds that nudge up or down and award respins when they appear. In our Crusader review, you’ll also find out about a bonus round that awards free spins with stacked wilds on reels 1 and 5. Special expander symbols can also increase the number of rows in play up to 12 and increase the paylines from 26 up to a maximum of 98. What else has Crusader got to offer? Let’s take a closer look.

There are plenty of extras to get stuck into in Crusader. They include nudging wilds, respins and a free spins round which can really get things moving.

If part of a Crusader wild lands, you’ll trigger a series of respins in the Crusader Wilds feature. The Crusader wild then nudges up or down on each respin until it fills the whole of the reel. The action then returns to the standard base game.

If you manage to fill the whole of reels 1 and 5 with Crusader wilds, either organically or via the respins, you’ll trigger the free spins feature.

The 2 stacked Crusader wilds will get you 8 free spins. These come with some pretty tasty extras too. The triggering stacked wilds on reels 1 and 5 lock in position for the duration of the Bonus Game feature.

Look out too for special arrow symbols. Each time one of these hits, 1 extra free spin is added to your total. It also adds 1 extra row to the reels and boosts the number of active paylines. It’s possible to take the rows up to 12 which offer 98 paylines.

The base game action plays out on a pretty standard 5 reel, 4 row machine. What is slightly unusual is that this base game machine offers 26 paylines. Crusader offers bet levels of between 20p and £100 per spin which makes it suitable for players of all bankrolls from microstakes grinders through to super high rollers.

You can set autoplay without having to leave the game screen. Just click on the autoplay button in the top right-hand corner of the screen. You can set it for 10, 25, 50 or 100 games. There’s no way to set win or loss stop limits though. You can set a time limit of 15, 30, 45 or 60 minutes via the setting tab.

The RTP is 96.1% which is pretty standard. The variance in Crusader is on the high side. It’s not quite as volatile as some ELK Studios releases but on a scale of 1 to 10, I’d rate Crusader as an 8. The max win per spin is 2,500 x your bet which is good.

You can endure some lengthy dry spells but it’s possible to land a stack of coins in a hurry in the Bonus Game feature if the stacked wilds and expanding reels do their stuff.

The Crusader mobile version works well. You might think that reels that can reach 12 rows high would be a struggle on a small screen device. They don’t have quite the impact you get on a laptop or desktop but they’re decent enough. The orchestral backing track is better with quality speakers too. It’s all playable enough on a tablet or mobile though.

The sound and visuals in Crusader are impressively done. A hilltop fortress under siege forms the backdrop to the reels. There you’ll find A, K and Q symbols alongside an assortment of banners, shields, daggers and treasure chests. The golden chalice is the most rewarding symbol, paying 10x your total bet if you land 5 on a payline.

All symbols, including the wild, can spin in stacked formation. Land multiple stacks in combination and you could quickly land a decent haul of coins.

The imagery is nicely drawn and the bright colours are easy to see against the rather dark backdrop. There’s a stirring orchestral score playing in the background while you spin. It’s a good fit for this epic theme. We rarely have cause to grumble about the design of slots from ELK Studios and Crusader is another visual and aural treat.

This trip back to the Middle Ages is nicely crafted, combining ELK Studios’ usual design flair with some very playable extras. The key to success is unlocking the free spins round. Get on a run there with the expanding reels and the stacked wilds and the coins can quickly build.

Payouts of up to 2,500x your total bet per free spin are possible here.  If you enjoy slots with a historical flavour or just fancy playing a game that combines impressive sound and visuals with innovative, volatile gameplay, you’ll find all that in Crusader. If medieval slots are appealing, you cannot go wrong with Black Knight II from WMS which can give you 3 sticky wild reels in the free spins feature.

❓  What is the Crusader slot RTP?

🥇 What is the Crusader slot maximum payout?

It’s possible to win jackpots of up to 2,500 x your total bet from a single spin in Crusader. The likeliest way to do that is via the free spins round where the extras can really get the action going.

🎰 Is there a Crusader slot mobile version?

Yes. Crusader has been optimised for desktop, tablet and mobile devices. The graphics stand up pretty well on the smaller devices too. Developer ELK Studios is a mobile-first provider.

⚡ What are Crusader wilds?

These are wilds that can land on reels 1 and 5. When they hit, they nudge up or down and award a respin. Fill both reels with Crusaders wilds to trigger the free spins round where the best opportunities arise.