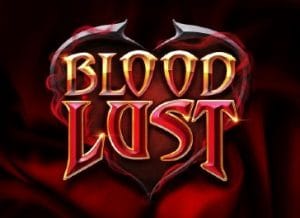 WHERE TO PLAY Blood Lust SLOT

Romantic horror with plenty of bite is what’s on offer in the Blood Lust slot, a vampire-themed game from ELK Studios. Boasting suitably creepy design, this virtual trip to Transylvania is played on a 5 reel, 99 payline machine and comes with some top extras. In our detailed Blood Lust review, you’ll find out about Boosted Stacks of identical symbols, Boosted Respins as well as a triggered bonus round that awards free spins. Collect symbols in meters during the free spins and they upgrade into the most lucrative symbol. Did we fall in love with this horror romance? Let’s see.

ELK Studios are usually good value for a decent range of extras when they release a new slot and Blood Lust is no exception. There’s a nice blend of base game modifiers and a couple of triggered extras including streak respins and a free spins bonus.

On each spin, every reel can include stacks of mystery symbols. These all transform into the same matching symbols which means you can see some lengthy trails. Land matching symbols across multiple reels on the same spin and you could end up with some very decent results.

This is triggered by landing the Respin symbol (the 3 dripping red candles) on reel 5. One symbol is picked at random. All examples of this symbol are held and a respin follows. Bonus scatters are also held. Landing another scatter in the respin will grant you access to the Bonus Game feature. The Bonus Game feature is triggered by landing 3 or more of the free spins scatter symbol anywhere on the reels on the same spin.

Each time one of the 4 vampire symbols lands during the free spins, it is collected in a meter. It doesn’t have to be in a winning combination, it just has to hit.

When a vampire meter is filled, that symbol is then upgraded into the top paying vampire symbol for the rest of the free spins. Land 3 scatters on the same free spin for a retrigger. There’s no limit to how many times you can retrigger the Bonus Game feature.

The action in the Blood Lust slot game takes place on a 5 reel, 4 row game engine that offers 99 paylines. Winners are formed in the standard manner by landing 3 or more matching symbols in a payline, starting from reel 1.

Playable from 20p to £100 per spin, you can set up autoplay for specific number of spins as required. There is also a session time limit if you want to watch your play.

The RTP of 96% puts it in the middle of the pack. The variance is a bit higher than that. Blood Lust isn’t a super volatile slot but it’s fiery enough. Out of 10, we’d rate the Blood Lust volatility at 8. The maximum payout stands at 2,500 x your total bet if you manage to land a perfect combination on the reels.

The Blood Lust slot has plenty of atmosphere. There’s a dark, brooding feel to the design here which is just what you’d expect from a horror-themed slot. It’s certainly not fluffy rabbits and pink elephants.

With a full moon, a creepy looking castle and a rather forlorn forest in the background, the reels are made up of lower value playing card suit symbols. More rewarding are the 4 vampires. There are 2 female vampires and 2 male, each brandishing a rather outlandish mop of hair.

The most rewarding symbol is the vampire with the slicked-back blonde hair – Dracula. He pays 40 x your bet if you land 5 on a payline.  You’ll also find a wild symbol which performs all the usual substituting duties. It pays like the high value Dracula symbol to.

There’s a comic book feel to the visuals which are simple but rather nicely done. We’re not in Scooby Doo territory when it comes to scares. It’s a bit more serious than that. Think the Twilight movies rather than anything properly chilly. It’s creepy enough though.

The ELK Studios game interface is simple. It’s easy to navigate your way around. Setting bet levels, autoplay and reading up on the paytable is straightforward. No grumbles here.

The white-faced vampires against the dark, moonlit background stand out very nicely, even on a small-screen device. The gameplay here in Blood Lust is relatively simple. That too is well suited if you’re playing the game in a tablet or mobile.

As perennial favourites like Immortal Romance show, the romantic horror theme is a hugely popular one. Blood Lust is another good addition to the genre. The design has a brooding quality which fits the theme well.

The gameplay stacks up too, with the respins, stacked symbols and free spins with upgrading symbols delivering a neat combination.

Add the relatively high volatility into the mix and potential payouts of up to 2,500 x your bet and you have a very playable take on this classic slot theme. You should also try Full Moon Romance from Thunderkick which has a similar look and feel.

❓  How volatile is the Blood Lust slot?

You wouldn’t expect a slot with this name to be a timid affair and Blood Lust certainly isn’t. The variance isn’t stratospheric but it’s still high. These vampires can deliver plenty of bite. It has an RTP of 96% meaning you’ll win frequently but in smaller amounts.

🥇 What is the Blood Lust slot maximum payout?

It’s possible to win a maximum prize of some 2,500 times your total bet in Blood Lust. This can come in a base game spin, respin or free spin. The likelihood increases in the free spins as vampire symbols transform into the highest value Dracula symbol for bigger wins.

🎰 Is there a Blood Lust mobile slot?

Yes, it’s possible to play Blood Lust on a tablet or mobile devices. You’ll find the same blend of atmospheric design as well as some potentially exciting features. The game works well particularly on smartphone screens as ELK Studios creates their slots for mobile devices in mind.

⚡ What are the Blood Lust slot bonus features?

The Bonus Game feature awards up to 15 free spins initially. Collect vampire symbols and you can also bring symbol upgrades into play as well as retrigger unlimited extra free spins. There are also respins and super-stacked mystery symbols to spice up the action.