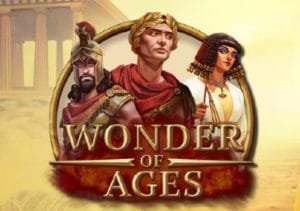 WHERE TO PLAY Wonder of Ages SLOT

We’ve played plenty of slots based on the ancient world but not many that fuse elements from Greece, Rome, Egypt and Asia. That’s what you’ll find in Blueprint Gaming’s Wonder of Ages slot though. It’s a 5 reel, 20 payline game that’s part of the Jackpot King Network which offers potentially enormous progressive jackpot prizes. As you’ll see in our detailed Wonder of Ages review, other highlights include a quartet of themed free spins round that come with an assortment of wild and multiplier extras. Let’s take a look at what treasures of the Ancient World are on offer in Wonder of Ages.

Free spins with modifiers are the key features to look at in Wonder of Ages. There are 4 different rounds, each one based on a specific ancient empire. You’ll also have a shot at landing a potentially massive progressive prize as Wonder of Ages is part of the Jackpot King network. Land 3, 4 or 5 bonus scatter symbols anywhere on the reels on the same spin and you’ll win an award equal to 3, 10 or 100 times your total bet. You’ll then get to pick from a selection of coins. Uncover 3 that match and you’ll go on to play the associated bonus feature.

After you’ve played your free spins, you’ll return to the Wonder of Ages board and pick again. If you find 3 matching coins, you’ll play those free spins. This is the same as offered in Playtech’s Age of the Gods slot. Anyway, if you find just a single Fallen Temple symbol, it’s a collect and the round is over.

As well as featuring ancient Kings, Wonder of Ages is also part of the Jackpot King Network of slots. This is a progressive jackpot network that can award enormous sums. The bonus round is triggered by landing 5 Jackpot King Deluxe Overlay symbols. Collect crowns to advance to the Wheel King. Spin the Wheel and you could win a Big Bet Multiplier or land a potentially life changing progressive jackpot prize.

There’s nothing very complicated about Wonder of Ages. The base game uses a 5 reel, 3 row game engine which combine to offer 20 paylines. Winning combinations are formed by landing 2 or more matching symbols in one of those paylines, starting from the leftmost reel. You can play from 10p to £200 per spin.

As in most Blueprint Gaming slots, you’ll have the option to set up to 100 auto spins. You can set loss limits here. The autoplay ends when you hit that limit, you trigger the free spins round or in the happy circumstance of landing the free spins round.

The RTP here is 95.49% which is actually pretty good for a progressive jackpot slot. We found the Wonder of Ages variance to be in the medium to high range. The maximum payout is an impressive 10,000 x your bet on every free spin with the 5x multiplier (in the Mighty Dynasty Free Games feature).

Wonder of Ages Theme – classy recreation of the ancient world A slot that includes imagery from a variety of empires and time periods could have been a bit of a mess. Blueprint Gaming has done a good job combining the different ages to create a visually arresting slot.

As well as I, II and III symbols, you’ll see a pottery jug and 6 higher paying character symbols. These include Mongol and Babylonian kings, a Pharaoh, a Roman centurion and Cleopatra. The best standard symbol is the Roman Emperor in the gold laurel wreath. Land 5 of these on a payline for a payout of 50 times your bet.

There’s also a wild. This substitutes for all the standard symbols. Land 5 wilds in a line and you’ll pocket a bumper award of 500 times your bet.

The game interface is the standard from Blueprint Gaming. It’s clear, intuitive and easy to use. Blueprint’s classy visuals are evident in the Wonder of Ages mobile slot. The symbols aren’t quite as clear against the red backdrop as they might have been. It’s still a nicely designed slot for mobile though.

This mash up of historical eras works rather well. The design is as classy as we’ve come to expect from Blueprint Gaming and the features offer plenty of variety. The free spin rounds with extras can deliver some impressive action. It’s possible to land back-to-back free spins rounds too, which can deliver some top results.

The best of the features is the Mighty Dynasty Free Games feature as the 5x multiplier can lead to 10,000 x bet wins on each free spin. There’s nothing spectacularly original about the modifiers in the bonus rounds but they make for a solid combination though.

Add the Jackpot King progressive prizes into the mix and Wonder of Ages becomes a very playable overall package, especially if you like the historical theme. If you want something a little lighter theme wise, Farm Yarn Favourites (by Blueprint Gaming) should do the trick.

❓ Is Wonder of Ages a progressive jackpot slot?

🥇 What is the Wonder of Ages RTP?

The Wonder of Ages RTP is 95.49%. That’s a little low by Blueprint Gaming standards but not bad for a progressive jackpot slot.

🎰 What bonus features does Wonder of Ages offer?

There are 4 different Wonder of Ages free spins bonuses. They each offer 9 free spins complete with a wild or multiplier modifier.

⚡ Can you play Wonder of Ages on mobile?

Yes, the Wonder of Ages mobile slot contains the same classy visuals and range of extras found in the desktop version.