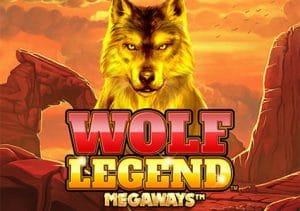 Join the wild animals on the rugged American plains in Wolf Legend MegaWays. This 6 reel video slot has been created by Blueprint Gaming and comes with the shape-shifting game engine where the number of ways to win changes with each spin. Highlights include cascading reels, mystery transforming symbols and a free spins round with expanding multipliers. Play on your PC, tablet or mobile device from between 10p and £10 per spin.

An arid wilderness is the setting here. On the reels are the usual lower value A to 9 symbols as well as an eagle, a bull and a big cat. Top of the payers is the wolf. Land 2, 3, 4, 5 or 6 of these on adjacent reels for a payout of 1, 2, 10, 25 or 50 times your bet. You’ll notice that the number of symbols on each reel changes with each spin. At their maximum, the reels can combine to offer 117,649 MegaWays.

Wolf Legend uses the Cascading Reels feature – after a successful spin, the winning symbols are removed and new ones drop in to replace them. The cascades keep on coming until there’s one where no new winning combination is formed. You’ll see 4 symbols positions above reels 2, 3, 4 and 5. The symbols here sweep in horizontally rather than vertically. These 4 positions are the only places you’ll find a wild. Like most of their video slots, Blueprint Gaming has put some pretty nifty extras into Wolf Legend MegaWays:

Mystery Symbols feature – these all transform into the same matching symbol whenever they hit. A new payout calculation is then made with the new symbols in position.

Free Spins feature – this is triggered by landing 3 or more bonus symbols on the same spin. Before you go on and play the actual free spins, you’ll have a chance to add to your tally via 3 streak respins in the Golden Streak feature. The reels here are made up of blanks and numbers. Each number is equal to an amount of free spins which is added to your total when the round proper begins. A streak spin made up totally blanks loses you a life. You’ll have up to 3 lives to try and amass as big a total as possible.

You’ll then be offered the chance to try and win even more free spins or collect what you’ve already got with the Gamble feature. If you want to gamble, spin the wheel and hope the pointer lands in the blue segment. If it lands in the red, you’ll lose all your free spins.

Once they’re gone, you’ll start the Free Spins feature. The cascading reels are in play here like in the base game. The wrinkle is that each cascade win increases a multiplier by 1x. Known as the Unlimited Multiplier feature, this doesn’t reset after a winless free spin either, the multiplier keeps heading north.

If you’ve played other MegaWays video slots from Blueprint Gaming, then you’ll have a pretty good idea of what to expect here. The design here is pretty good for a Blueprint title. It does the job well enough alongside a stirring orchestral score.

The gameplay ticks all the MegaWays boxes, especially the free spins round where a re-trigger can get the multiplier flying to impressive effect. With wins of 50,000 times your bet on each free spin, we really like Wolf Legend MegaWays. Well designed and offering plenty of action, it’s another solid addition to the MegaWays catalogue. I recommend you try Temple of Treasure MegaWays where you can choose from various options in the feature – 1 of them gives you a minimum 10,000 MegaWays.