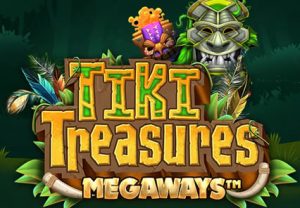 An ancient Pacific island civilisation is the setting for Tiki Treasure MegaWays, a 6 reel jackpot video slot from Blueprint Gaming. It’s played using cascading reels where new symbol drops occur following each winning spin. Trigger the bonus round and you’ll have the pick of 4 different free spin and starting multiplier combinations. As part of the Jackpot King network, it also offers a chance at scooping a bumper progressive prize. Play on your PC, tablet or mobile device from between 10p and £10 per spin.

As usual for a Blueprint Gaming, we’ve no grumbles about the design here which is excellent. The reels are flanked by flaming torches and carved totems. On the reel blocks you’ll find lower value royal values plus a selection of higher paying masks. The purple mask is the best of these, delivering awards of 50 times your bet if you land 6 in combination.

The game engine uses the Cascading Reels feature. After a winner hits, the successful symbols are taken away and new ones drop in position from above. These cascades keep on coming as long as a new winner is created.

If you’re feeling lucky, you can opt for the Mystery Choice. This awards any combination of free spins and starting multiplier. This could mean 15 free spins with a mighty 10x starting boost. If the Tiki gods aren’t smiling, you could end up with the minimum 5 free spins at 1x.

Each cascading reels win during the feature increases your starting multiplier by 1x – it’s known as the Unlimited Win Multiplier feature. Get on a roll here and the coins can quickly fly. You can also win more free spins with no maximum either!

Blueprint Gaming has created another entertaining MegaWays video slot here. The sound and visuals are as impressive as we’ve come to expect. The gameplay isn’t quite as exotic as the setting but there’s more than enough going on here to keep things interesting, especially during the free spins where the multipliers can really get things motoring (and give you wins of 10,000 times your bet on each of them).

If you like volatile video slots and the shape-shifting game mechanic, then Tiki Treasures MegaWays offers plenty of appeal. I would also try Yggdrasil Gaming’s Easter Island if you want a taste of the Pacific.