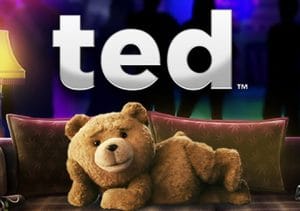 WHERE TO PLAY Ted SLOT

A potty-mouthed teddy bear proved a surprise movie hit in 2012 and now Ted has got to star in his own online video slot. Powered by Blueprint Gaming, this 5 reel, 20 payline game is just as crude as the film. It’s packed full of extras though. Look out for 6 base game modifiers that award a range of wilds plus transforming, colossal and moving symbols. Also on offer are 5 bonus features including spin the wheel, round the board, pick’em and free spin bonuses. Join Ted from between 20p and £500 per spin.

The reels are set against a sofa strewn with beer cars with Ted sleeping off a hangover. Joining the lower value playing card symbols are a bong, a swan, a crate of beers and Ted’s other half, Tami-Lynn. The top standard symbol is the Ted logo – this spins in a fully stacked formation and pays up to 500 coins per payline. Ted himself is the wild – he also pays up to 500 coins and replaces all other symbols apart from the bonus scatter.

This slot version of Ted is brimming with extras – 6 of them can land at random on any spin during the base game to deliver some modifier goodies:

Ted also comes with 5 bonus features – land 3 or more of the Thunder Buddies Bonus symbol on the same spin and you’ll be taken to a wheel which will spin to determine which of the following extras you’ve been awarded:

Wheel of Fartune Bonus feature – this is a classic ‘Wheel of Fortune’ style round. Spin the wheel. Multiplier prizes are awarded depending on where the pointer lands. Land on an arrow and you’ll move to an inner wheel where bigger multipliers can be won. Reach the centre wheel and you’ll have a shot at the Big Money Bonus feature.

Bar Crawl Bonus feature – this is a variation on the cash trail. Work your way along the board and collect prizes depending on which square you land on. If you manage to find 5 Big Money counters on your travels, you’ll advance to the Big Money Bonus feature.

Super Mart Free Spins feature – you’ll be taken to a supermarket conveyor belt with wilds on the wall behind. When the belt stops, the wilds behind the reels are added and a new payout is made. You’ll be awarded 5 free spins here.

Flash Free Spins feature – this bonus is played on a new set of 5×4 reels. Also, added into the mix is a meter offering extra cash prizes, more free spins and added wilds. Stop the flash on the meter above the reels to win the lit prize.

Big Money Bonus feature – Ted himself takes centre stage in the Big Money Bonus feature. He appears on a carousel in the middle of the screen and is surrounded by multipliers and Sale signs. After a spin, you’ll be awarded a multiplier prize. Then choose a Sale sign. If you’re lucky, you’ll be awarded a re-spin and another, potentially larger, multiplier prize – up to 1,000 times your total bet!

When the bonus is first triggered, you have the option to gamble for a better one. You can keep on taking the 50/50 shot until you reach the top feature, the Big Money Bonus feature, or you lose. In which case, you’ll be awarded a Mystery Cash consolation prize.

There’s plenty to get stuck into in Ted – as you’d expect, the modifier extras land far more frequently than the main features. They can deliver well enough in their own right though. We enjoyed some great success with the Psychedelic Super Spin feature, winning over 100 times our stake from a single spin.

With its farts, burps and sweary dialogue, the video slot version of Ted is just as crude as the movie. The visuals aren’t quite as high-end as we’d expected but the jaunty soundtrack is a good one. Any shortfalls in the design department were more than made up by the range of extras on offer which are excellent.

Seth MacFarlane’s 2012 movie was a surprise hit with movie lovers. With its top range of bonus rounds, the slot version of Ted should do just the same. If you like movie themed games, Microgaming’s Jurassic Park is recommended.