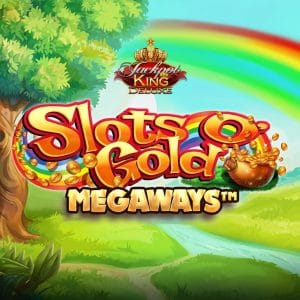 Hope for pots of treasure at the end of the rainbow in Slots O’Gold Megaways, a 6 reel, win both ways video slot sequel from Blueprint Gaming. The action here uses the MegaWays game engine where the number of symbols on each reel change with each spin. The number of live MegaWays varies too but can reach a whopping 15,625! Other goodies here include mystery transforming symbols and respins with sticky stacked wilds. Play on your PC, tablet or mobile from between 10p and £50 per spin.

The first Slots O’Gold video slot was played using a simple 5 reel, 10 payline machine. The MegaWays game engine is very different. The number of symbols on each reel varies from between 1 and 5 on each spin. At their maximum height on all 5 reels. they’ll combine to deliver 15,625 ways to win. Winning combinations can start from both reel 1 and reel 6.

If the setup is rather different from the original. the sounds and visuals are very familiar. The same forest is in the background and the symbols, though different, have a similar fortune theme. In addition to the A to 9 royal values you’ll see horse shoes, harps and green hats. The pot of gold is the most lucrative symbol, paying 0.5, 1, 5, 10 or 50 times your bet if you land 2, 3, 4, 5 or 6 on adjacent reels.

Joining the standard symbols is the Rainbow Gold logo. This is a mystery transforming symbol. All instances of this symbol that land on the same spin morph into the same matching symbol. A new payout calculation then follows.

The grinning leprechaun offers the best chances of landing a big score. He is the game’s wild and can land on reels 2, 3, 4 and 5. Whenever a wild hits, you’ll activate the Rainbow Respin feature. The leprechaun wild expands and fills the whole of that reel. It locks in place and the rest of the reels spin again. If another leprechaun wild lands. it too expands and another respin is awarded, this time with 2 stacked wilds. The process continues until no new wild lands or all 4 of the middle reels are wild and you’ve had 4 respins.

Slots O’Gold MegaWays also gives you a shot at hitting a progressive jackpot prizes as it’s part of the Jackpot King Deluxe Bonus network. After triggering (which can happen at random on any spin). collect crowns to work your way up the prize ladder. Land enough of them and you’ll have a crack at the Wheel Bonus where the life-changing sums are up for grabs.

Slots O’Gold MegaWays is very similar to the original Slots O’Gold video slot. The sounds and visuals are nicely done and the MegaWays game engine and regularly hitting respins keep the pace high. This can lead to wins of 10,000 times your bet on every spin/respin.

It didn’t quite wow us as much as Vikings Unleashed MegaWays (our favourite Megaways title to date) but Slots O’Gold MegaWays is a perfectly playable take on the classic lucky leprechaun theme.