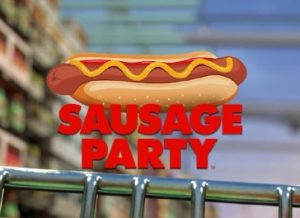 WHERE TO PLAY Sausage Party SLOT

The most unlikely named movie in cinema history has spawned a slot version. Yes, we’re talking about the gloriously titled Sausage Party slot, which is now a 5 reel, 20 payline game from Blueprint Gaming. As you’ll find out in our detailed Sausage Party review, there’s a huge selection of extras on offer here.  You’ll find 6 modifiers that can strike at random in the base game and award a range of wild, colossal reel and bonus extras. There are also 6 triggered bonus rounds which deliver free spins with extra trimmings as well as pick me prizes and potentially big bonuses. The crude, animated adult comedy has gained cult status since its release in 2016. Let’s see if the Sausage Party slot does the same.

Most branded slots in the Blueprint Gaming catalogue are packed full of extras. Sausage Party is no exception. You’ll discover a whole raft of base game modifiers as well as triggered bonus features. First though, the modifiers which are known as The Immortals.

There are 6 The Immortal features which are activated randomly on a base game spin.

On any losing spin, you could see a knife or a dustpan and brush appear. These can turn that losing combination into a winner.

Wild in the Aisles bonus features

Land 3 or more scatter symbols anywhere on the reels on the same spin and you’ll get pushed down a supermarket aisle in shopping trolley. This will determine which of the following features you’ll go on to play:

You will notice there’s a Power Play button to the side of the reels. Click it to activate the Power Play Bet feature. Whilst your bet will double, a win of 5 x your bet will see you spin the bottle to win a bet multiplier or a Wild in the Aisles bonus feature.

The base game action is played on a standard 5 reel, 3 row, 20 payline machine. That at least, is very straightforward. The wagering limits make it a suitable pick for all players, regardless of bankroll. The minimum bet is 10p, rising to a maximum of £500 per spin.

You can set up to 100 autoplay spins if required. There are options to set win and loss limits as well as ending autoplay when you trigger a feature.

The RTP is 95.95% which isn’t bad. This isn’t the most volatile of slots. The Sausage Party variance is in the medium range. The top win is 500 x your bet on each spin. With the potential 2x multiplier in the Bun In The Oven Free Spins feature, you could win 1,000 x your bet on every free spin. The anarchic feel of the original film is evident in the Sausage Party slot. The cartoon-style visuals include A to J royals as well as a cast of sausage characters. The most rewarding standard symbol is the Sausage Party logo. This spins in stacked formation and pays 25 x your bet if you land 5 on a payline. That same amount is on offer from the wild which replaces everything apart from the scatter.

The cartoon-style visuals are very well done which is just what we’ve come to expect from a Blueprint Gaming slot, branded or otherwise. Likewise, the soundtrack. The theme is very silly but the design impresses.

You can play Sausage Party on mobile, tablet and desktop devices – the wacky theme and graphics work well on all screen sizes.

The adult humor and bizarre theme of Sausage Part proved popular with critics and cinema goers alike. This slot version is a good adaptation, blending the design and anarchic feel of the film with a good selection of extras.

If you like plenty of variety from your gameplay, you won’t be disappointed with what Sausage Party has to offer. The wealth of extras keeps things fresh. Even if you’ve never seen the film, the Sausage Party slot is worth a look.

Blueprint Gaming is no stranger to branded slots as they have developed games based on The Goonies, Mars Attacks, Ted and Beavis and Butt-Head. There is a dedicated Movie/TV slots section here at CasinoManual.co.uk where you can find titles such as Jurassic World, Justice League, Gladiator Road to Rome and Narcos.

❓ What are the Sausage Party bonus features?

Where to begin? Sausage Party comes with 6 base game modifiers that can strike at random on any spin. There are also a raft of features including pick me rounds and free spins. If you like variety, there’s plenty on offer here.

🥇 What is the Sausage Party slot RTP?

The Sausage Party slot return to player rate is 95.95%. The puts it somewhere in the middle when compared to other slots.

The variance in Sausage Party is in the medium range. This sausage is neither raw nor overcooked! You can win up to 1,000 x your bet on each free spin.

Sausage Party is a Blueprint Gaming slot. You can expect classy, glossy design as well as plenty of features and bonus features.