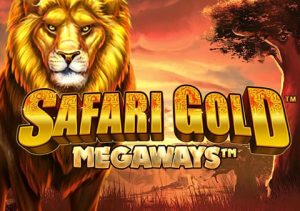 The great plains of African are the setting for Safari Gold Megaways, a 6 reel video slot from Blueprint Gaming where the number of ways to win can reach 117,649. Other highlights including cascading reels, transforming symbols and a free spins round complete with expanding multipliers. Stakes on this safari start at 10p, rising to a maximum of £10 per spin.

The design in Safari Gold Megaways is done cartoon style. Set against a Savannah backdrop, you’ll see A to 10 royals alongside higher paying animal symbols. These include bison, elephants, lions and cheetahs. There’s also a wild. It’s not quite as vivid as the design in some other Blueprint Games but it does the job well enough.

The number of symbols on each reel changes with each spin thanks to the Megaways game mechanic. This alters the number of potential ways to create winning combination too. At their maximum, the reels can combine to offer 117,649 Megaways.

Like most Megaways video slots, Safari Gold Megaways uses the Cascading Symbols feature. Winning symbols are removed and new ones drop in and replace them. These keep on coming as long as a new winning combination hits. The golden lion symbol has some magical powers. All examples of this symbol that land on the same spin transform into the same matching symbol. A new payout consideration is then made with the newly morphed symbols in place. This is called the Mystery Symbol feature.

The Free Spins feature is triggered by landing 4 or more diamond scatters on the same spin. You’ll then get to spin the Bonus Wheel. Depending on where the pointer land, you’ll win between 5 and 30 free spins complete with a starting multiplier of between 2x and 10x. Re-triggers are possible here too if you land 3 or more scatters on the same free spin. The cascading reels are in play during the free spins. Each one that hits increases your starting multiplier by 1x. The multiplier doesn’t reset following a winless spin either.

If you don’t want to wait, buy the feature

Safari Gold Megaways This is just what we’ve come to expect from one of Blueprint Gaming’s Megaways video slots. The sound and visuals are bold and bright and the gameplay, though relatively simple, can deliver some pretty feisty action – up to 50,000 times bet on every spin or free spin.

That’s true of the Free Spins feature where the expanding multipliers can really get things moving. The variance here is in the medium to high range. There’s nothing revolutionary on offer here. If you’ve become a fan of the Megaways mechanic, then Safari Gold Megaways is a perfectly solid all round performer and well worth a spin.