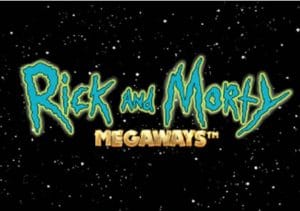 WHERE TO PLAY Rick and Morty Megaways SLOT

Cartoon characters Rick and Morty have gained cult status as part of the Adult Swim series. The pair have been given the slot treatment courtesy of Blueprint Gaming in Rick and Morty Megaways. Even if you’ve never heard of Rick and Morty before, there’s enough going on here to make the slot version worth investigating.

The Megaways game engine offers up to 117,649 ways to win for starters. There are also mystery symbols and 3 different free spin rounds with expanding multipliers, streak respin bonuses and wild extras. Let’s take a closer look in our detailed Rick and Morty Megaways review.

Branded slots from Blueprint Gaming usually mean loads of features and if you like variety then you won’t be disappointed with what Rick and Morty Megaways has to offer. There’s plenty going on here.

The base game engine uses cascading reels. Each time you hit a winner, the successful symbols are removed and new ones replace them. These cascades continue if a new winning combination is created.

Boosting your winning chances in the base game are special transforming symbols. All examples of the spaceship door symbol that appear on the same spin turn into the same standard symbol. A new payout consideration is made with these new symbols in place.

Free spins are central to much of the best action in Rick and Morty Megaways. Land 4, 5 or 6 Bonus symbols on the same spin and you’ll receive 12, 17 or 22 free spins. You’ll then be offered a choice of different features. They all offer a combination of free spins in conjunction with a special modifier extra. Here are your options.

This round starts with a standard 1x multiplier active. Each time you land a cascade win, that multiplier increases by 1x. There’s no limit on how high this multiplier can go.

Expect wilds and plenty of them in this feature. The central block of 4 reels is a Wild Zone for the duration of these free spins. Land matching standard symbols in the 4-reel window at the top of the screen and in the Wild Zone directly below and they turn into wilds. If you land a wild in the top reel window, the whole of the reel below turns wild. These wilds can come with multipliers of up to 5x attached too.

This a slightly complex feature but it can deliver some top action. Joining the standard symbols on the reels are gold badges with cash values attached. These badge symbols are activated when you land a V symbol in the top reel window.

The badge symbols are held and a respin follows. If a new badge joins the cluster, the process is repeated. When you’re out of respins, the value from the badges are added together for your overall win. Making things potentially even more interesting is if you land another V symbol in the top window. The combined payout from the badges is multiplied by the number of V symbols.

For example, say you landed £15 from the badges and had 2 or 3 V symbols in the top window the prize would be £30 or £45. To the side of the reels you’ll see the 4 Vindicator characters. These can appear in the gold badges and come with awards of 10, 20, 50 or 100x your bet attached once activated.

There’s also a Mystery Spins option. The number of free spins you’ll receive and which modifier is active are determined by spinning the Bonus Wheel. This is what’s on offer depending on the number of Bonus symbols from the triggering spin.

Buy your way in

For a fee of 150 x your total bet, you’ll have the chance to the Buy the Bonus. This awards the Mystery Free Spins round. Do you feel lucky?

The action in Rick and Morty Megaways takes place on a 6 reel machine. The number of symbols on each of those reels alters with each spin. This changes the number of ways you can create a winning combination too. At their maximum size, you’ll have 117,649 active Megaways in play.

Rick and Morty Megaways is a decent choice for both casual and experienced players with stakes ranging from between 10p and £10 per spin. If you just want to sit back and watch then select autoplay which can be set to deliver between 10 and 100 free spins. Loss and win limits can be adjusted as you wish.

In the base game the RTP is a solid 96.55%. This bumps up to an even better 97.05% during the feature round. This is high by slots standards. Variance wise, it’s medium to high with maximum wins of 50,000 x bet per spin or free spin. Lastly, the rather basic colourful visuals work just as well on a tablet or mobile as they do on a desktop device. In fact, you won’t lose anything from playing on a smaller screen.

Rick and Morty Megaways Theme – true to the cartoon

If you’re familiar with the source material, you’ll find plenty that’s familiar in the slot version of Rick and Morty (Megaways). Like the original cartoon, there’s a simplicity to the visuals here. It’s rather basic but is nicely put together.

Morty tops the bill as far as payouts go, offering awards of 50 times your bet if you land 6 on adjoining reels. Like most Blueprint Gaming slots, there’s little cause to grumble as far as design goes. Blueprint have released plenty of branded slots in the past – my pick would be The Goonies.

The cartoon version of Rick and Morty Megaways has gained cult status among late night TV viewers. Blueprint Gaming has made a pretty good attempt at bringing it to life in slot form. The design is just what we’d expect from a Blueprint adaptation. The developer can sometimes overload its slots with modifiers and extras but they’ve got the balance just about right here.

There’s enough going on without it being bloated. We imagine there are you plenty of you reading this who have never heard of Rick and Morty. Even if you’re unfamiliar, the nifty extras make this game worth a closer look. If you’re a fan of Megaways slots though, Royal Mint Megaways from Big Time Gaming would be my choice.

❓ Who are Rick and Morty?

Does it matter if I don’t know who they are? No, it really doesn’t matter if you’ve never seen the cult cartoon (which is worth a watch in itself). The bonus rounds and Megaways make it a very playable slot.

The most you can win per spin is 50,000 x bet – the chances of winning increases in the free spins features with the unlimited win multiplier giving you the best chance to reach this amount. 50,000 x bet per spin is pretty common for Megaways slots.

🎰 How many Megaways does Rick and Morty Megaways offer?

You can spin with 117,649 ways to win active if all 6 reels reach their maximum size – 7 symbols per reel. As per usual, the number of Megaways changes with each spin – randomly.

⚡ What bonuses does Rick and Morty Megaways have?

In addition to the cascading reels and mystery symbols, you’ll find free spins with modifiers including dynamic multipliers, transforming wilds and streak-style respins with cash bonuses.