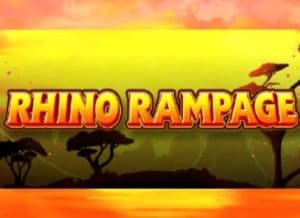 WHERE TO PLAY Rhino Rampage SLOT

Join the wildebeests, meerkats and cheetahs on the African plains in the feature-filled Rhino Rampage slot. Created by Blueprint Gaming, this safari-themed game is played using a 5 reel, 25 payline game engine and comes with a couple of classic feature rounds. Trigger the free spins and you’ll receive 5 free spins to begin with. Boosting your winning chances here are colossal symbols that can fill 3 whole reels. The Lightning Spins are streak respins that award cash prizes as well as a shot at triggering 1 of 4 jackpot prizes. Read on for our full Rhino Rampage review.

There’s nothing spectacularly innovative in Rhino Rampage. There are 2 cracking bonus rounds though that can really get this safari motoring.

The first feature we’ll look at is the Free Spins feature. It’s triggered in the usual manner by landing the Bonus symbol on reels 1, 3 and 5 on the same spin. Your reward is 5 free spins. That’s not a huge allocation.

Joining the action here though are colossal symbols. On each free spin, 3 adjoining reels will become a colossal symbol which can deliver some potentially massive combinations. If the Bonus symbols falls in a colossal symbol block, you’ll get a retrigger and another round of free games.

The second feature is the Lightning Spins feature. This becomes active if you land 6 or more moon symbols on the same base game spin or if you land a colossal moon during the free spins.

The moon symbols lock in place and 3 respins are awarded. On these respins, the positions are made up of blanks or moons. If you land a moon symbol, it joins the moons already in position and locks in place too. The number or respins then resets to 3.

The round ends when you run out of respins or you’ve filled the whole of the reels with moons. You’ll notice that each moon symbols comes with a cash value attached. These are added together to give you an overall prize.

You could also see Mini, Minor or Major symbols land among the moons during the respins. If these hit, they awarded the associated jackpot prize. The amounts are as follows:

If you’re lucky enough to fill every symbols position on the reels with a moon, you’ll win the big Jackpot prize. This is a progressive jackpot so can rise infinitely. The Jackpot prizes comes on top of the prizes from the moons.

The Rhino Rampage slot has 5 reels and 25 paylines. Wins are created by landing 3 or more matching symbols across any of the paylines beginning from the first reel.

You can play Rhino Rampage at stakes that start at 25p per spin. Big game hunters can take that up to £25 per spin. Adjust bet levels by clicking on the arrows on the left-hand side of the reels. You can set between 10 and 100 autoplay spins as required. It’s also possible to set win and loss limits to suit. If there was a Premier League table of slots developers that was judged on design, Blueprint Gaming would be very much in the European hunt. Rhino Rampage is another very well judge slot in terms of sound and visuals.

Set against a sun-kissed savannah backdrop, the reels are made up of lower value royals which have been embellished with tribal paraphernalia. More rewarding are the 4 animals symbols. In order of value are the meerkat, wildebeest, dog-like creature and the cheetah. Land 3, 4 or 5 of the latter in combination for an award of 1, 4 or 8 x your total bet.

The rampaging rhino of the title is the wild. This appears in stacked formation and can fill whole reels. As usual, it substitutes for all the standard symbols in winning combinations.

The images are bright, colourful and packed full of details. The action bounces along with a classic African soundtrack playing in the background. It works very well. Navigation is easy too. Accessing the paytable and the game info buttons are straightforward. Sometimes the paytable is rather limited in Blueprint’s more feature-filled slots. No complaints here though.

The high spec sound and visuals on display in the desktop version are present in the Rhino Rampage mobile slot. It comes together perfectly well on the smaller screen.

The slot safari is one of the most popular themes with slot developers. Do we need any more virtual trips to Africa? Well, yes, if they’re like this.

Blueprint Gaming hasn’t exactly re-invented the wheel with Rhino Rampage. The 2 feature rounds on offer both offer plenty of opportunities though and the sound and visuals are up to the usual impeccable standards. Put those elements together and this is one African jaunt we’re happy to recommend.

If you fancy heading to the African plains, Safari Gold Megaways (also by Blueprint Gaming) and Raging Rhino Megaways (WMS) are highly recommended.

❓ What are Lightning Spins?

These are a set of 3 streak respins. If you land a new moon symbol to join the original cluster, it too is held and the respins reset to 3. Each moon comes with a cash value attached. These are added together to give you an overall payout. There’s also fixed jackpots and a progressive jackpot to be won from the Lightning Spins feature.

🥇 What is the Rhino Rampage RTP?

The RTP in the Rhino Rampage slot is 96.28% for the actual game. If you add in the jackpot contribution and reserve, it amounts to a total RTP of 96.78%. This is very high for a progressive jackpot slot which tend to hover around the 95% mark.

🎰 Is there a Rhino Rampage mobile slot?

Yes, developer Blueprint Gaming has created Rhino Rampage slots for tablets and mobiles. You’ll find the same combination of high-class sound and visuals and top features as in the desktop version.

⚡ Are there any Rhino Rampage jackpots?

You can land a jackpot prize during the Lightning Spins feature. Land the Mini, Minor or Major symbols and you’ll win the associated prize. To trigger the big jackpot, which is progressive, you’ll need to fill all the reel positions with moons.