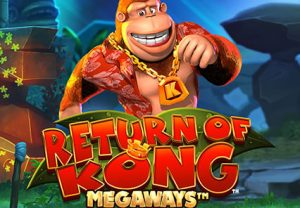 WHERE TO PLAY Return of Kong MegaWays SLOT

Go hunting for a big beast of a jackpot in the jungle kingdom of nature’s flashiest monkey. Return of Kong MegaWays is a 6 reel, cascading reels video slot from Blueprint Gaming where the number of ways to win can reach a mighty 117,649. The highlight of this slapstick safari is the Free Spins feature that awards free spins where each reaction win increases a multiplier. Play on your PC, tablet or mobile from between 10p and £10 per spin.

As usual for a video slot from Blueprint Gaming, there’s plenty to like about the design of Return of King MegaWays. A cartoon jungle forms the backdrop to the action. On the stone reel blocks you’ll see A to 9 royals plus birds, rhinos and tigers. As you’d expect, Kong is the top payer, offering wards of up to 50 times your bet per winning combination.

There’s also a wild that replaces all of the standard symbols. Land a winning combination and the Cascading Symbols feature kicks in – this removes the winning symbols and drops new ones in to replace them. The number of symbols on each reel can change with each spin too. As can the number of MegaWays. If all 6 reels reach their maximum height, you’ll have 117,649 ways to create a winner.

Kong’s medallions are the scatters. Spell out the word K.O.N.G with those scatters to trigger the Free Spins feature. You’ll then receive 12 free spins (plus extras if you landed more medallions on that triggering spin).

The mechanic is slightly different during the feature. After each ‘reaction’, the Unlimited Win Multiplier applies with the multiplier increasing by 1 (with no limits). This multiplier doesn’t revert to the standard 1x after a losing free spin either. It remains the same or goes higher. Look out for monkey icon symbols – 3 of them activate the Golden Monkeys feature. This can lead to an increase of the number of guaranteed MegaWays live on each free spin or add extra free spins to your total.

Kong can also trigger the Mystery Kong feature in the base game. The mighty monkey lobs up to 100 barrels onto the reels. These barrels then transform into the same symbol and can create some big winning clusters. These mystery barrels are in play throughout the Free Spins feature too.

We’re in familiar MegaWays territory with Return of Kong MegaWays. The sound and visuals are well constructed and have a light-hearted, cartoonish feel. The gameplay is pretty solid and just what we’ve come to expect from a MegaWays title. The highlight is the free spins round where the multipliers can do their stuff if you get on a roll – up to 50,000 times your bet on each of them. As far as volatility goes, we’re in the medium to high range.

This is just what we’d expect from a game of this type from Blueprint Gaming. The design is as high-end as you’d expect and the gameplay ticks all the usual boxes. If you enjoy MegaWays video slots, then Return of Kong MegaWays is worth investigating. If you like the theme, NextGen Gaming’s Gorilla Go Wilder would be my choice.