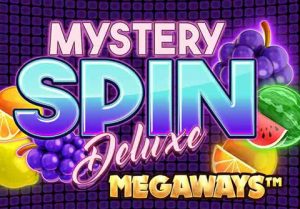 The classic fruity gets a funky makeover in Mystery Spin Deluxe MegaWays. Created by Blueprint Gaming, it uses the MegaWays game mechanic where the number of ways to create a winner varies from between 729 and 117,649 with each spin. There are also mystery transforming symbols and synced reels. Play on your PC, tablet or mobile from between 10p and £10 per spin.

In payout order are cherries, lemon, grapes, orange and melon. The best of them is the lucky 7 which will get you an award of 1, 1.5, 2.5 or 10 times you bet if you land 3, 4, 5 or 6 on adjacent reels on the same spin. Helping to create the winners is the wild which can appear on all 6 reels and substitute for all the standard symbols.

The MegaWays game mechanic means that the number of symbols on each reel changes with each spin. This also alters the number of MegaWays in play. This can mean you’ll have 729, 4,096, 15,625, 46,656 or 117,649 ways to win. Keep tabs of the figures above the reels. The MegaWays game engine isn’t the only extra in Mystery Spin Deluxe

In Sync feature – adjacent reels can be given a purple glow. This means they are Synced Reels. Matching symbols will then appear on each of them. On most occasions, the number of reels in sync is 2. You could see all 6 sync if you’re really lucky though.

Mystery Symbol feature – the Mystery Symbol does just what you’d expect it to do. All instances of these that appear on the same spin all morph into the same symbol and a new payout consideration is made.

Mystery Spin – when this triggers, all positions on the synced reels will be filled with Mystery Symbols that then morph into the same matching symbol to create a cluster. A Mystery Spin with a high value Mystery Symbol transformation can quickly get things moving.

We’ve become used to a wealth of features from Blueprint Gaming video slots. The developer has kept things relatively simple here. Even accounting for the MegaWays mechanic, the gameplay is pretty straightforward. The synced reels keep the pace high enough to keep things ticking over. The Mystery Symbols and Mystery Spins can deliver some good action too – up to 10,000 times your bet on each spin.

It doesn’t have the variety of some other MegaWays titles (think Wolf Legend MegaWays), but this modern take on the classic fruit machine is a good place to start if you want a gentle introduction to MegaWays.