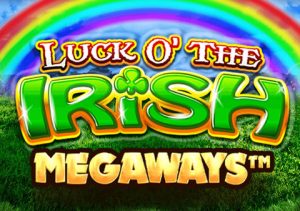 WHERE TO PLAY Luck O’ The Irish MegaWays SLOT

A lucky leprechaun can make your jackpot wishes come true in Luck O’ The Irish Megaways, a simple but highly volatile video slot release from Blueprint Gaming. The game uses Big Time Gaming’s popular game mechanic where the number of symbols on each reel, and the number of potential ways to win, changes with each spin. Look out for special mystery transforming symbols. You’ll also have the option to activate Fortune Spins mode which increases the action from 1 to 4 sets of reels. Mystery symbols landing on machine 1 copy onto the other 3 machines. Play on your PC, tablet or mobile from between 10p and £10 per spin.

Simple and Blueprint Gaming aren’t words that usually go together. The developer is best known for its feature-filled branded content which is usually packed full of bonus features and modifiers. Luck O’ The Irish Megaways is far more straightforward. The action takes place on a 5 reel machine where you’ll find lower value A to 9 symbols plus gemstones and a pot of gold. Winning combinations are landed by hitting the same symbol on adjoining reels from left to right.

The number of symbols on each reel changes with each spin. That means that the number of ways to create a winner alters too. If the reels reach their maximum configuration there are 16,807 ways to won. The gameplay here is rather basic but there are a couple of extras to take note of.

Look out for the smiling leprechaun on the Luck O’ The Irish symbol. All examples of this that land on the same spin transform into the same symbol. A new payout calculation then follows with the transformed symbols in place. This is known as the Mystery Symbols feature.

Activate the Fortune Spins feature and you’ll play on an expanded machine for 20 times your stake. Instead of a single set of reels, you’ll have 4 different machines in play on each spin. They spin independently. Look out if you land Mystery Symbols on the first machine though as they copy onto the same positions on the other sets of reels. If they morph into a high value symbol, then look out.

The gameplay here is pretty simple for a Megaways video slot. It’s potentially fiery though. This is a volatile game with potential wins of 10,000 times your bet on each spin. If you’re a fan of the Irish theme or enjoy video slots with this game mechanic, then Luck O’ The Irish Megaways is worth a look. If you like the popular game mechanic, Blueprint Gaming has produced better titles – such as Temple of Treasure Megaways.