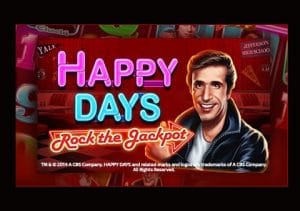 WHERE TO PLAY Happy Days Rock the Jackpot SLOT

Heyyy! Get ready to rock around the clock and win with Happy Days, a 5 reel, 40 payline slot based on the hit TV sitcom. Created by Blueprint Gaming, the reels are packed full of all the favourite characters from the show including Chachi, Ritchie, Joanie and of course the Fonz himself. Look out for free spins, bonus games and a chance to win a huge progressive jackpot. Stakes range from 40p up to £200 per spin.

Happy Days comes with two main bonus features. First there’s the Record Picker Bonus feature which is triggered randomly and can appear on any spin during the base game. Once activated, you’ll be presented with selection of three records, each of which offers a special bonus.

Choose the Rock N’ Roll record and you’ll be rewarded with a shuffle which will shift the symbols into a winning combination. The Wild Reels does exactly what it says, turning a whole reel wild and greatly boosting the chance of a win.

Pick the Colossal Happy Days and you’ll be granted a Colossal Wild or find the Jukebox Bonus to trigger the Free Spins feature. Best of all though is the Rock the Jackpot Progressive symbol. Find that and you’ll win the progressive jackpot of up to £50,000!

The other main feature round is the Free Spins feature. These are triggered when the Jukebox symbols hits anywhere on reels 2, 3 and 4. You’ll be awarded an initial five free spins. During the feature, the Golden Record symbols will become live.

When they appear on the reels, they will all randomly turn into the same symbol, Ritchie for example. They will then form paylines with all the other Ritchies on show to create some big multiple-line wins. It’s possible to retrigger free spins too. Get on a roll and this round can be very lucrative.

Variance is around the medium level, offering a balance of small and big wins. Set against the backdrop of a classic American diner, Happy Days looks a treat. The cartoon-style imagery is well done and is set off by a chugging rock and roll soundtrack. You’ll even hear the famous Happy Days theme during one of the features.

The gameplay is up there with the visuals too, especially the Golden Records during the Free Spins feature. Throw in the chance of winning a huge progressive jackpot and Happy Days gets a big thumbs up. If you like slots based on famous television shows, Microgaming’s Game of Thrones is pretty good. However, if you like Blueprint Gaming titles, their iconic Zuma is a must.