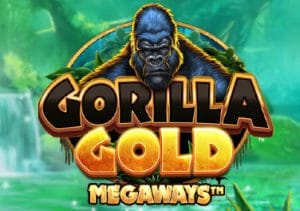 Expect plenty of wild jungle adventure in the Gorilla Gold Megaways slot, a super volatile game created by Blueprint Gaming. The action here takes place across 4 different machines, each of which can offer up to 117,649 ways to win. Put them together and the Megaways can reach an enormous 470,596! As you’ll find out in our Gorilla Gold Megaways review, there’s loads of variety on offer here in the form of cascading reels, mystery transforming symbols, free spins with expanding multipliers and super spins that can spread to all 4 sets of reels. Let’s start our jungle trek.

You’ll find the usual fast-paced gameplay in Gorilla Gold Megaways found in other slots with this hugely popular mechanic.

That means cascading reels, mystery transforming symbols and free spins with a dynamic multiplier. The big difference here is that there are 4 sets of reels in play simultaneously in the base game.

The standard cascading reels game engine is live in Gorilla Gold Megaways. Land a winning combination and those successful symbols are removed and new ones drop in and replace them. The cascades continue until there’s one where no new winning combination is formed.

This ? is another staple of the Megaways slot and its present and correct here. All examples of the ? that land on the same spin transform into the same matching symbol. A payout calculation then follows.

Land 4 or more scatter symbols anywhere on the reels on the same spin to trigger the feature round. You’ll then spin a wheel which will determine whether you’ve won the standard Free Spins or the Super Spins.

Here’s what’s on offer from the bonus wheel depending on how many scatters triggered the round.

If you win free spins, the Gamble feature will be triggered. If you win, you’ll win more free spins but if you lose, you’ll go back to the base game. If you gamble all the way to the end of the trail, you’ll play 30 free spins in the Super Spins feature.

If you land the standard Free Spins feature, you’ll play the usual Megaways offering on 1 machine with 6 reels and up to 117,649 ways to win. Each cascade win increases a multiplier by 1x with the Unlimited Win Multiplier feature. Land 3 or 4 scatters to add another 5 or 10 free spins to your total.

Things have the potential to get much more interesting if you trigger the Super Spins though.

The action in the Super Spins feature starts on 1 set of reels (with 6 reels and up to 117,649 ways to win). Just like in the standard free spins, a multiplier increases by 1x with each cascade win.

Look out for the special Golden Monkey which opens up other sets of reels as well as adding more free spins to your total.

Each cascade win on any unlocked machine increases a multiplier on all the sets of reels. This can really get things moving.

If you don’t win at least 20 times your total bet during Super Spins feature, 5 more free spins will be added to your tally. This is known as the Bonus Guarantee feature.

Gorilla Gold Megaways uses a 6 reel set up. The number of symbols on each reel varies between 2 and 7 on each spin. That alters the number of Megaways. Fully expanded, a single set of reels offers 117,649 ways to win. Multiply that by 4 and you have a mind-boggling 470,956 potential Megaways!

Stakes here range from between 50p and £100 per spin. You can set up to 100 autoplay spins as required. There are also options to set loss limits or stop when you trigger the feature. You can also play using the default spin speed or ramp it up 2 notches.

If you like volatile action, you won’t be disappointed with what Gorilla Gold Megaways has to offer. The variance here is high. The maximum win per spin is 20,000 times your total bet.

The RTP rate in Gorilla Gold Megaways is a very impressive 97%. That compares very favourably with much of the competition. With so many moving parts in a Megaways slot, it’s really important for the visuals to be clear and easily identifiable. Now multiply the number of reels to 4 and it becomes even more crucial. Blueprint Gaming has done a good job here.

The imagery is bright and colourful but clear enough. You’ll see A to 9 royals alongside a collection of wild animals including tigers, crocodiles and of course, gorillas. The latter pays 10 x bet for 6 in combination. There’s also a wild which appears above reels 2, 3, 4 and 5. It replaces all symbols bar the scatter.

There’s a frantic, drum-heavy backing track playing while you spin which complements the fast-paced gameplay rather well.

It’s not the most sophisticated visual arrangement you’ll see but it does the job well enough.

The HTML5 version for Android and iOS mobile and tablet devices is solid enough. We preferred playing this slot on a bigger screen though, given the extra reel sets in play.

On a single set of reels, Gorilla Gold Megaways would be a perfectly serviceable Megaways slot, albeit not an especially original one. The quartet of machines really ramps up the action here though making it a far more interesting proposition.

With all the moving parts, it won’t be for everyone. If you like Megaways slots that can deliver super volatile gameplay, then this is one jungle trek worth making. Especially as the RTP is high at 97% and the max payout is 20,000 times your total bet per spin.

If you want unique Megaways, sticky to games from Big Time Gaming – such as Royal Mint Megaways as they add extra mechanics to the Megaways engine.

❓ How many ways to win does Gorilla Gold Megaways offer?

🥇 What is the Gorilla Gold Megaways RTP?

The RTP in Gorilla Gold Megaways is a generous 97%. That’s certainly better than you’ll find in most slots.

🎰 What is the most you can win from a Gorilla Gold Megaways spin?

The max payout for the Gorilla Gold Megaways slot per spin is 20,000 x bet – this is achieved more easily with the increasing multipliers in either the Free Spins or Super Spins features.

⚡ What are Super Spins?

These are free spins that start on a single set of reels but can spread to up to 4 machines by collecting monkey symbols. A multiplier increases on 1 boosts the payouts on all the others too.