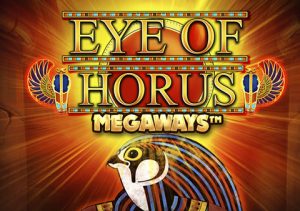 WHERE TO PLAY Eye of Horus Megaways SLOT

Blueprint Gaming has taken one of its most popular ancient Egyptian-themed slots and given it an upgrade to create Eye of Horus Megaways. Played using a 6 reel game engine, the number of Megaways can reach 15,625. Other highlights include expanding wilds and free spins feature where symbols are upgraded each time a wild appears. Head to the pyramid on all devices from between 10p and £10 per spin.

The number of symbols on each of the 6 reels here varies with each spin. You could see 3, 4 or 5 on any reel. This affects the number of Megaways in play. The fully expanded reels offer 15,625 different ways to create a winning combination. You need to then get 3 or more matching symbols on successive reels starting from the first reel.

Like most slots in the Blueprint Gaming catalogue, there’s a clean and crisp look to the design in Eye of Horus Megaways. Joining the sleek royal values are a selection of Egyptian hieroglyph symbols including a bird, flowers, an ankh cross, scarab beetle and the jackal Anubis. The eye is the top standard symbol, paying 20 times your bet if you land 6 on adjacent reels.

Central to much of the best action here is the half man / half bird Horus. This Egyptian deity is the wild and replaces everything apart from the pyramid scatter symbol. Land Horus on reels 2, 3, 4 or 5 and it expands to fill the whole of the reel, turning it wild in the process.

The Free Spins feature is triggered in the usual manner by landing 3, 4, 5 or 6 scatters on the same spin. After a payout of 2, 20, 50 or 100 times your total bet, you’ll go on to play 12 free spins with some potentially very tasty extras.

Just like the base game, the wild is key to success during the feature.  Land a wild on reels 2, 3 or 4 and it expands as usual. It also delivers a symbol upgrade. All examples of the lowest value hieroglyph on the reels transform into the next highest paying symbol.

Land another wold during the feature and the process is repeated. By the end of the round, you could see the reels dominated by 2 or even just 1 high value symbols which can really gets things shifting. The wild also adds extra free spins to your total. Land 1, 2 or 3 for an extra 2, 3 or 5 free spins.

With so many moving parts and potential features, some Megaways slots can be a little overwhelming. Blueprint Gaming has kept things relatively simple here and it works well. The visuals are very well constructed and the expanding wilds, free spins and symbol upgrades deliver more than enough action to keep things interesting.

We’re in the medium to high range as far as volatility is concerned – payouts can reach up to 10,000 x bet on each free spin. If you like the Egyptian theme or the game mechanic, Eye of Horus Megaways is a slot to consider. If you want more volatile Megaways games, Blueprint Gaming’s Safari Gold Megaways would be my choice as you can win 50,000 x bet on each spin.