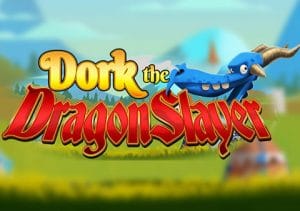 WHERE TO PLAY Dork the Dragon Slayer SLOT

A cartoon mediaeval knight takes centre stage in Dork The Dragon Slayer – a 5 reel, 20 payline video slot that can be played from 20p to £500 per spin. Created by Blueprint Gaming, look out for cascading reels, base game modifiers and a battle-style free spins bonus where expanding multipliers can boost your payouts.

Even though the design here is simply done the visuals are neat, crisp and clear. Set against a field filled with the tents of a mediaeval court you’ll see ‘olde worlde’ A to J symbols as well as a sword, a jousting pole and a castle. The Dork The Dragon Slayer logo is the most rewarding symbol. It pays 2, 5 or 25 times your bet if you land 3, 4 or 5 on a line. There’s also a wild that replaces all standard symbols. It pays the same as the logo.

The cascading reels game mechanic sees winning symbols removed from play and new symbols dropping in from above to replace them. The cascades keep on coming until no new winner is created. Get on a roll here to bring the free spins into play. More of which, shortly.

Dork can appear at random on any spin and trigger a special modifier.

Rather than by landing scatters the Dragon Slayer Free Spins feature becomes active after hitting a series of 3 successive cascade wins (4 in total) on the same spin. Dork will then go into battle with a dragon. Special symbols join the action here. These determine the result of the battle.

Defeat a dragon and you’ll bring a multiplier into play. The free spins keep on coming until Dork loses all his health points. If he defeats all the dragons, an extra 9 free spins are added to your total. After the free spins are completed your overall payout is boosted by the final dragon multiplier – up to 5x.

This is a rather slight video slot. The cartoon design is simple but well put together. The gameplay is straightforward too, even taking into consideration the battle element of the free spins. The variance is in the medium range which offers a balance between size and frequency of payouts. You can however win 2,500 times your bet on every free spin with the 5x multiplier.

The rather silly theme won’t be for everyone. If you fancy some cartoon-style medieval derring do, then join Dork The Dragon Slayer on his jackpot quest.