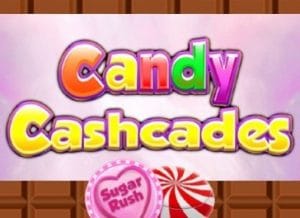 WHERE TO PLAY Candy Cashcades SLOT

Sugary goodies can deliver some pretty sweet action in the Candy Cashcades slot, a colourful confectionery-themed game from Blueprint Gaming. It has the look of a social media game akin to Candy Crush. Played on an 8×8 grid, look out for cascading reel wins, sticky wilds that increase a multiplier with each successive cascade and colossal symbols. There’s also a free drops round where a colossal symbol will hit on each of them to guarantee a winning combination. Is this sugary slot all things nice? Read our in-depth Candy Cashcades review to find out.

A slot played on an 8×8 grid was always likely to have plenty going on. That’s certainly the case with Candy Cashcades courtesy of the symbol cascades. There’s much more action on offer too courtesy of the lollipop wilds, multipliers, colossal symbols and free games.

After a payout consideration has been made, the successful winning cluster is removed from the reels and new symbols drop down and replace them. The only exception is the lollipop wild. Rather than disappearing, this shifts to an adjacent empty position then locks in place for the new cascade.

If the new cascade also results in a winner, the process is repeated. These cascades keep on coming until no new winning cluster is formed. The Cascading Symbols feature appears in many Blueprint Gaming slots, such as Vikings Unleashed Megaways.

As well as replacing all the standard symbols in a winning combination, the lollipop wild can also deliver a multiplier boost. The potential multiplier increases by 1x with each successive cascade. After a winless cascade, payouts go back to their standard 1x.

The lollipop symbol serves a dual role here. As well as a wild, it’s also a scatter. Landing 3 wilds on the same drop triggers the Sugar Rush Win Falls feature.

The first thing we’ll look at from the Candy Cashcades slot is the 8×8 game grid. Winning combinations are formed by landing 5 or more of the same matching symbol in a cluster. Obviously, the larger the cluster, the bigger the potential rewards on offer.

Bet sizes here range from the minimum 10p mix up variety right up to the Willy Wonka-sized stakes. The maximum bet is a truly eye-watering £500 per spin. Adjusting stakes is easy. Just click on the up and down arrows to the left of the reels.

Autoplay is easy to set up to. You can run up to 100 autospins in a row. There’s no turbo mode but you can set win and loss limits to end the autoplay as required.

The RTP is a little on the low side at 95.5%. As far as variance goes, Candy Cashcades sits in the medium range. The max win compensates for the low RTP as max payouts can reach 50,000 x bet per spin or free spin. These sweetie-themed slots aren’t usually subtle when it comes to design. You’d be hard pushed to describe Candy Cashcades as understated. The visuals are super bright and in your face. The setting is a Candy world that wouldn’t look out of place in a kiddies’ cartoon. The reel grid is made up of 6 standard sweetie symbols.

The best-paying symbol is the pink Love Heart (minus the message!). A minimum cluster of 5 awards a payout equal to your total bet. If you get a big cluster of 25 or more symbols together that rises to an impressive 100 x bet. If there’s a wild involved, you could also benefit from a multiplier boost which can take the payout even higher.

There’s nothing complex about the design here. The symbols are glossy and clear though which is important in a slot that has so many moving parts. There’s a slightly eerie soundtrack playing in the background while you spin that reminded us of a 1950s sci-fi film. It’s a bit strange given the theme.

The Blueprint Gaming game interface is simple to use. Like many of their slots, the paytable isn’t the most detailed. For the full array of extras on offer you’ll have to go to the game info which is next to the paytable.

On the paytable, payouts are shown in cash and are adjusted according to the size of your bet. It makes things nice and clear.

Candy Cashcades is available to play on mobile and tablet devices. The HTML5 version is silky smooth, even on the small screen. The grid game engine works nicely enough. It wouldn’t be our first choice for a mobile slot but it’s perfectly playable.

If you enjoy playing social media games like Candy Crush then Candy Cashcades should appeal. If you’re a fan of classic fruities or video slots filled with backstory, this probably won’t be one for you.

As usual for a Blueprint Gaming slot, the design here is very well done. The gameplay stacks up pretty well too if you like this style of slot. It’s not a favourite theme of ours but if you like the Facebook feel, then Candy Cashcades is tasty enough to deliver some sweet action. It does offer potential 50,000 x bet payouts though.

For a similar feel, try Sweet Success Megaways (from Blueprint Gaming) which looks almost identical but uses the Megaways game engine and has a lot more to offer in terms of gameplay.

❓ Does Candy Cashcades have free spins?

🥇 What is the Candy Cashcades RTP?

The Candy Cashcades return to player rate is a little on the skinny side at 95.50%. We’ve certainly seen many higher numbers than this. On average, every £100 wagered delivers a return of £95.50.

🎰 Is there a Candy Cashcades mobile slot?

Blueprint Gaming has created fully optimized versions of Candy Cashcades for mobile and tablet devices. Expect the developer’s usual high-end sound and visuals as well as the full array of features found in the desktop version. You can play Candy Cashcades on Android and Apple iOS devices.

⚡ What is the Candy Cashcades max payout?

The most you can win from a Candy Cashcades spin is 50,000 times your total bet. This can be achieved by getting a big winning cluster and combining with multipliers. It’s a medium variance slot so there’s a decent balance between the number of winning spins and the potential from the size of the payouts.