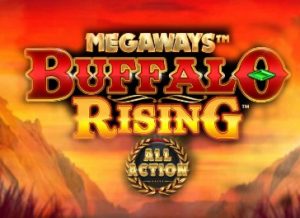 WHERE TO PLAY Buffalo Rising Megaways All Action SLOT

The wild American plains are the setting for Buffalo Rising Megaways All Action. It’s a 6 reel, slot from Blueprint Gaming where the number of active Megaways can reach 117,649. Other highlights are mystery transforming symbols and cascading reels. What makes this different is the All Action element which means that you’ll always be playing in the feature with expanding multipliers active. Play on all devices from between £10 and £1,000 per spin.

A dusky desert canyon is the setting here. On the reels are A to 9 royals as well as an elk, a wolf and a bear. The buffalo of the title is the most rewarding symbol with 6 of them giving you 0.5 x bet. There’s also a wild that can appear on the middle 4 reels only.

Buffalo Rising Megaways All Action uses the classic Megaways mechanic. The number of symbols on each reel varies with each spin. This also alters the number of ways you can create a winning combination. At their maximum size, the reels will have 117,649 Megaways active.

All Action – all the time

Rather than waiting to trigger the main feature round, you’ll be playing in Bonus mode all the time. It’s not a cheap option though. The minimum stake is £10.

You’ll then have the pick of the following free spin and starting multiplier combinations:

Each cascading reels win during the free spins round increases that multiplier by 1x. Landing 3 or more of the gemstone scatter on the same free spin results in a re-trigger.

Land a winning combination and a cascade follows. The successful symbols are removed and new ones replace them. The cascades continue as long as a new winner is formed. Keep a special eye out for the canyon scene which is the mystery symbol. These all transform into the same matching symbol whenever they appear. A new payout calculation is made with the newly matched symbols in place.

Classic Megaways action with a twist

Buffalo Rising Megaways All Action adds a new layer to the Megaways slot. The gameplay is the same as you’ll find in a standard Megaways slot but you’ll always be playing in the Buffalo Spins feature with the expanding multipliers active all the time.

Compared to the original game,f Bufalo Rising Megaways, it’s poor – firstly, the minimum bet per spin is £10 (even though that takes you into the free spins. Now, if you look at the value of the symbols, the high paying buffalo would give you 50 x bet for 6 in combination when playing the original slot – in the ‘All Action’ version, it’s 10 x lower.

The maximum win per free spin is 10,000 x bet which is identical in both versions but you need to get lucky with the multipliers really. The RTP of 97.01% is higher though. To win big, I would opt for the bigger starting multiplier of 10x but the value of the symbols and the high minimum bet level makes Buffalo Rising Megaways All Action a slot that won’t appeal to many.