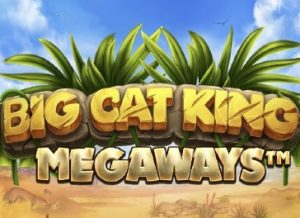 Join a pride of Lions and a host of other giant felines in the Big Cat King Megaways slot, another Megaways title from Blueprint Gaming. There’s nothing very complicated about this wild adventure which comes with the standard collection of Megaways extras. That includes cascading reels, mystery transforming symbols and a free spins round complete with expanding multipliers which increase every time you land a winning cascade. You can also try your luck on the Spin-Creaser Wheel when you trigger the feature and try and land some extra free spins. Find out what else this slot safari has to offer in our detailed Big Cat King Megaways review. As we’ve come to expect from a Blueprint Gaming release, there’s a glossy, high spec look to the visuals in the Big Cat King Megaways slot.  In the base game, the action is set against the sun-kissed Savannah. Trigger the bonus round and it shifts to a nighttime scene.

Slots from Blueprint Gaming are usually very high spec when it comes to design and Big Cat King Megaways doesn’t disappoint on that score. Set in Africa, it has a big cats theme. There’s a typically stirring orchestral score playing in the background while you spin too. There’s no shortage of atmosphere here. It’s just what we’ve come to expect from a game from this developer.

The comic book-style visuals are impressively done. Set against a backdrop of the African plains, the reels are made up of lower value A to 10 royals who spin alongside 5 more rewarding big cats.  As you’d expect, the lion tops the bill as far as payouts are concerned. Landing 6 on adjoining reels on the same spin pays 50 x your total bet. You will also see a wild symbol which replaces all symbols mentioned.

You can play this slot on all devices. The slick design makes the Big Cat King Megaways mobile slot very playable. They’ve got the Megaways mechanic down pat on mobile too. You won’t lose anything playing on the small screens here.

The action the Big Cat King Megaways slot takes place on the usual 6-reel game engine. Winning combinations are formed by landing 3 or more matching symbols on adjacent reels, starting from the left most reel.

The Megaways mechanic means that the number of symbols on each reel varies with each spin. This also alters how many ways you can form a winning combination. More symbols = more Megaways. At their maximum configuration, you’ll have 117,649 ways to create a winner.

You can join the big beasts here at bet that start at 20p per spin that rise to a maximum of £20 per spin. Adjust your best via the up and down arrows to the left of the reels. Autoplay is available if required. You can set up to 100 and adjust win and loss stop limits as you choose. It’s all very simple and intuitive.

This slot safari can be quite fiery. The volatility is on the north side of medium. The Big Cat King Megaways RTP rate is an above average 96.5% which stacks up pretty well. The max win of 50,000 x bet per spin is also impressive.

The Megaways mechanic has proved a smash hit with slots players and Blueprint Gaming has largely kept to the standard formula. Mystery transforming symbols, cascading reels and free spins with expanding multipliers all feature here. There are a couple of tweaks to the usual recipe though, including the Spin-Creaser Wheel where you can pay and then try and gamble your way to more free games. Let’s take a closer look.

As usual for a Megaways slot, the Cascading Reels feature is active here. After a winner hits, winning symbols are blasted off the grid and new symbols replace them. A new payout consideration then follows with these new symbols.

If a new winner is formed, another cascade follows. This process continues as long as a new winning combination is created

Another staple of the Megaways slots is the Mystery Symbols feature and its present and correct in Big Cat King Megaways. In this case, the green foliage symbol is the one to look out for. Whenever these appear, they all transform into the same matching standard symbol and a payout calculation is made. One wrinkle to the standard formula comes in the form of the Spin-Creaser Wheel feature. This allows you to pay a fee and try and gamble your way to extra free spins.

You’ll spin a wheel. If the pointer lands in the green, you’ll win the number of free spins associated with that segment of the wheel. In theory, you could land up to 50 free spins via the Wheel.

When you are ready to play the free spins, you’ll find that they come with an expanding multiplier. The action starts at the standard 1x. Land a cascade win and it rises by 1x.

In some slots, the multiplier reverts to 1x following an unsuccessful cascade. That’s not the case here though. The multiplier keeps on rising throughout the feature. Finally, unlimited retriggers are possible too which can really get the multipliers motoring.

Players in some territories (not the UK) will have the option to buy the free spins if they wish. Click on the Roaring Free Spins Bet feature button where you can choose to buy 5, 8, 10 or 12 free spins for 25, 50, 75 or 100 x stake respectively.

In some, but not all countries, players will be offered the ability to buy the bonus. If you want to partake, just click on the Roaring Free Spins Bet feature button to the left of the reels.

You’ll then be offered the pick of 5, 8, 10 or 12 free spins, complete with the price you’ll have to pay to activate the feature. The top option will set you back 100 x your total bet. Unfortunately, this isn’t available for players in the UK.

There’s not much on offer here that you won’t have already seen in other Megaways slots. That formula has proved hugely successful and if it ain’t broke, why fix it. The blend of cascading reels, mystery symbols, free spins and multipliers is a solid one.

What is the Big Cat King Megaways RTP?

What is the Big Cat King Megaways max win?

The biggest possible win in Big Cat King Megaways is 50,000 x your total bet per spin. Whilst you can win on any spin, your chances improve with the various bonus features.

Is there a Big Cat King Megaways free spins feature?

Yes. Activate the Free Spins feature for a minimum 12 free spins. You can gamble for more free spins via the Spin-Creaser Wheel feature. Once in, there’s a multiplier that increases by 1 with each win. There are also unlimited retriggers for infinite free spins.

What are Cascading Reels?