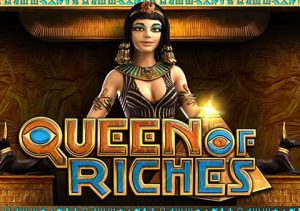 WHERE TO PLAY Queen of Riches Megaways SLOT

Big Time Gaming’s 2nd Megaways slot is the explosive Queen of Riches (Megaways). It’s a 6 reel game that offers up to 117,649 different ways to create a winner. Look out for cloned reels which can fill up to 5 reels with matching symbols as well as full stack wilds that come with multipliers that combine up to 49x. Play this high variance Egyptian-themed slot from between 20p and £10 per spin.

As you’d expect from a slot called Queen of Riches, there’s a decadent feel to the design here. Guarded by a pair of jackals, the reels are dripping in gold. There you’ll find A to 9 royals as well as the Eye of Ra, the Scarab beetle and the bird god Horus. The top standard symbol is the pyramid. This pays 1, 2.5, 5, 15 or 30 times your bet if you land 2, 3, 4, 5 or 6 in combination.

The Megaways game engine means that the number of symbols on each of the 6 reels changes with each spin. So too does the number of ways you can create a winning combination. If all 6 reels reach their maximum height of 7 symbols, there will be 117,649 active Megaways in play. You form wins by getting match symbols on adjacent reels – beginning from reel 1.

The Egyptian queen Cleopatra is the game’s wild and she replaces all the standard symbols. When these land fully stacked, they can count as up to 7 symbols. Each fully stacked wild also comes with a multiplier of between 2x and 7x attached. Land more than 1 full reel wild on the same spin and the multipliers are combined. For example, 7x full stack wilds on reels 2 and 4 would deliver a multiplier boost of 49x! Full reel wilds can land anywhere apart from reel 1. This is known as the Full Reel Wilds feature.

The Reel Clone feature can trigger randomly on any spin. Between 2 and 6 reels can clone so that they all show the same matching symbols. This includes stacks of wild reels, complete with their attached multipliers – it’s therefore easier to get the multipliers (up to 49x) from the Full Reel Wilds feature.

As Megaways slots go, Queen of Riches Megaways is rather simple. It might not be groaning with features but the cloned reels and stacked wilds with multipliers can deliver plenty of action, especially when you throw in the Megaways game engine.

It’s volatile too – very volatile in fact. You can endure spells as dry as the Sahara. Get the multipliers and cloned reels going though and the Queen of Riches could live up to her name. There are maximum wins of 20,000 times your bet on each spin with the big multipliers. It also boasts an RTP of 96.9% which is high.

There are countless ancient Egyptian themed video slots out there – Queen of Riches Megaways may not be the best-looking game available but the unique multipliers and cloned reels sets it apart from most. If you like the popular mechanic from Big Time Gaming, it’s worth trying the Bonanza Megaways slot (Big Time Gaming’s most popular game by some distance).