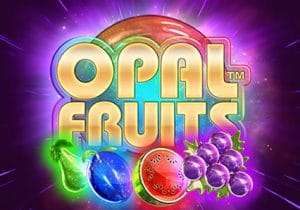 WHERE TO PLAY Opal Fruits SLOT

Space age design combines with classic fruity imagery in Opal Fruits, an innovative 6 reel, 5,625 ways to win video slot from Big Time Gaming that uses the Triple Reaction game mechanic. Highlights include multiplier wilds that can combine to boost payouts by as much as 1,296x as well as a free spins round with an unlimited multiplier. Play this high variance game on your PC, tablet or mobile from between 10p and £20 per spin.

The set up in Opal Fruits is a little unusual. The action takes place on a 3x5x5x5x5x3 machine. The symbols at the top and bottom of the middle chunk of reels sweep in horizontally.

The design itself, like many Big Time Gaming video slots, is actually rather simple. Set against a space backdrop, you’ll see the usual combination of lower value A to 9 symbols as well as more lucrative pears, plums and melons. The best standard symbol is the bunch of grapes which pays 50 times your total bet if you land 6 in combination.

Like many other Big Time Gaming titles, Opal Fruits comes with a Reactions feature. After a winner hits, the successful symbols are blasted away and new ones drop in and replace them to give another shot at creating a winner. The reactions continue until there’s a symbol drop where no new winner hits.

Appearing in the 5 high reels only is the wild. As well as a standard wild you could also see a 3x multiplier wilds. This trebles the payout when it forms part of a winning combination. If you land 2 multiplier wilds on the same reel, they are added together to provide a 6x boost. Multiple wilds on different rows are multiplied together. In the unlikely event of getting a quartet of 6x boosts, you’ll be in line for a massive multiplier of some 1,296x!

The main feature is the Free Spins feature. This is triggered by landing golden letters that spell the word FREE. Extra letters on the triggering spin provide a starting 5x or 10x multiplier once the feature begins. The Reaction wins are in play during the feature.

The design here isn’t as crystal clear as you’ll find from some developers. The gameplay really impresses though. It’s relatively simple but still delivers plenty of action and a potentially knockout payout punch with wins of up to 36,000 times your bet on every spin.

Opal Fruits was of course the former name of the classic sweet Starburst. A coincidence that Starburst is a hugely popular video slot with a theme that’s not a million miles from here? Perhaps. Regardless, Big Time Gaming has created another innovative, volatile and playable game here. As the old advert used to say, Opal Fruits can really make your mouth water. I recommend you look at other Big Time Gaming titles as they are the creators of MegaWays – Holy Diver MegaWays and Bonanza are the 2 best ones.