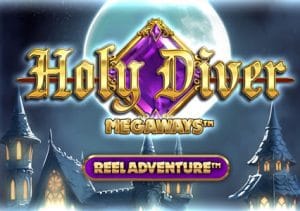 A cult concept album by an American heavy rock band is the unusual inspiration for Holy Diver Megaways, a video slot from Big Time Gaming. Played using the shape-shifting 6 reel, game engine, the number of symbols on each reel changes with each spin. At their maximum they can offer 15,120 ways to win in the base game and an eye-watering 586,971 Megaways in the Free Spins feature! Join a gallant knight on his quest for wilds, multipliers and free spins from between 10p and £20 per spin.

Based on an American heavy rock band Dio

The source material in Holy Diver Megaways comes from US rockers Dio which tells the epic tale of a knight and his quest to reach the mysterious Sorcerer’s Castle. The knight is one of the main elements of this rather unorthodox game. He appears on a path underneath the 6 reel game machine.

On that path are a series of treasure chests which can appear underneath reels 2, 3, 4, 5 and 6. When the knight reaches a treasure chest, it opens to reveal a special modifier which is applied to the reels above:

Holy Diver Megaways also comes with a Free Spins feature. You can activate this when you’ve collected enough gemstones in the meter to the side of the reels. Alternatively, you can carry on collecting until you’ve reached the next milestone. Take the spins immediately and you’ll receive 10 free spins. If you wait until the milestones are passed, then 2x and 3x multipliers come into play.

The gallant knight continues his trek during the Free Spins feature. Instead of treasure chests, it’s diamonds that lie in his path. The first 4 times the knight reaches a diamond 1 extra free spin is added to you total. Once he reaches the fifth diamond, you’ll receive 8 extra free spins. The size of the reels can get enormous here. If all 6 reels reach their maximum, there are a possible 567,789 Megaways in play.

It might not be the flashiest looking Megaways slot we’ve seen but it’s arguably the most unusual in terms of theme and backstory. The range of extras on offer here is pretty good too. There’s a nice variety to the features and the variance is high enough to keep you on your toes. You can win a whopping 23,306 times your bet on every free spin too.

We won’t be investigating the Dio back catalogue off the back of Holy Diver MegaWays. It’s a surprisingly likeable video slot even if it is a little rough around the edges. I also recommend you try The Final Countdown which also is based on a rock band.