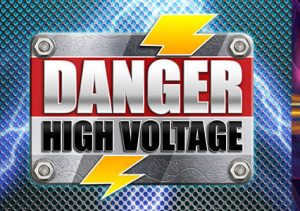 The biggest hit from American rock band Electric Six forms the basis to Danger! High Voltage, a 6 reel, 4,096 ways to win video slot from Big Time Gaming. Highlights here include multiplier wilds that can boost payouts by up to 6x as well as 2 free spin rounds. These come with sticky wilds or wild multipliers that combine to boost payouts by up to 66x. Play on your PC, tablet or mobile device from between 20p and £40 per spin.

Set against a backdrop of brightly coloured disco lights, the reels here feature A to 9 royals as well as symbols that feature in the lyrics of the song. They include tacos, glitterballs and bells. Top of the standard payers is the skull. Land 6 of these in combination for a payout of 25 times your total bet.

The game comes with 2 feature rounds. Both of them are triggered by landing 3 of the tattoo scatter on the same spin. You’ll then get to choose from the following extras:

Gates of Hell Free Spins feature – on offer here are 7 free spins. Throughout the feature, 1 specially chosen standard symbol will turn into a wild. This new wild will lock in position whenever it hits and remain in place for the remainder of the feature. If you manage to fill a reel with sticky wilds, you’ll receive 3 extra free spins.

High Voltage Free Spins feature – opt for this round and you’ll receive 15 free spins. The High Voltage Wild is in play in this feature. This can bring extra wilds symbols into play or deliver multipliers of 1x, 22x, 33x, 44x, 55x or 66x. Re-triggers are possible here too.

Like many Big Time Gaming video slots, Danger! High Voltage isn’t the slickest game you’ll see as far as visuals go. There’s an almost cartoon feel to the design. You’ll hear the famous Danger! High Voltage song blasting away as you spin though. The gameplay is a step up from the design and offers plenty of action. The variance is in the medium to high range with potential payouts of 15,476 times your bet on each high voltage free spin.

A game based on a song by Electric Six seemed an unlikely fit. It works surprisingly well. We won’t be investigating the band’s back catalogue but if you’re after some rather anarchic gameplay it does the job. I also recommend you play Big Time Gaming’s The Final Countdown which is also based on another rock classic.