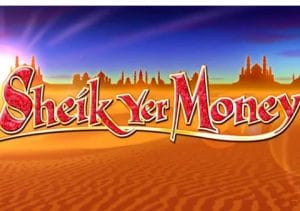 Sheik Yer Money is an Arabian set, luxury themed slot powered by Barcrest. It comes with a 5 reel, 10 payline game engine as well as frozen wilds, a magic lamp that can transform into a mystery symbol and the Sheik Shake feature which guarantees a winning combination. Head to the desert from between 10p and £500 per spin.

Set against a desert backdrop and Arabian style buildings, the reels include stylised playing card symbols alongside a quartet of gemstones. The best of these is the shimmering diamond which awards 250 times your line bet for a 5 symbol combination.

Look out too for the mystic lamp symbol which can appear as stacked on any reel – it transforms into a randomly selected mystery symbol. Any other lamps on the screen will also change into the same symbol to create a better winning opportunity.

The Sheik himself can also make a cameo appearance too – he can randomly walk onto the reels and give them a shake and in the process transform them so that there is a winning combination on show.
You can also opt to play in Big Bet mode – this is a series of linked, higher costs spins. In return you get extra goodies and an improved Return to Play rate. Opt for the £10 Big Bet and when the mystic lamp symbol lands, it will be frozen in place for the rest of your quota of spins and reveal a mystery symbol. This can be any of the gemstones or the low value playing cards.

Up the Big Bet to £15 and the offering is largely the same as £10 – the big difference being that the mystery symbol can be a wild and not just a gemstone or playing card. The £20 level adds sticky wilds into the mix too.

Go for the maximum £25 Big Bet and you’ll see the 10, J and Q symbols removed from the line-up of mystery symbols. This means that the potential wins are larger than at smaller stakes. The wilds are in play here too. After they’ve hit, they’ll be frozen in place for the remainder of you set of five spins.

If you can afford it, it’s worth playing in Big Bet mode – opt for the maximum and the RTP goes up to a very player friendly 98.2%.

The visuals in Sheik Yer Money are fairly basic but bright and bold. The action plays out to a catchy Arabian style soundtrack which bounces along nicely.

We’d have liked to have seen some free spins of course but the other features offer some decent compensation. The overall variance is in the medium range. If you like the Arabian theme, and have the bankroll, then Sheik Yer Money is worth a look. Alternatively, NetEnt’s Arabian Nights offers you a progressive jackpot.