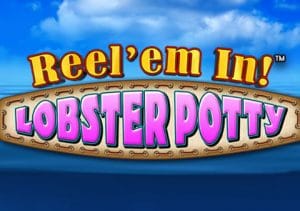 WHERE TO PLAY Reel ‘Em In Lobster Potty SLOT

Barcrest is once again inviting players to take to the water and try and land a bumper catch of coins, this time in Reel ‘Em In Lobster Potty. This latest Reel ‘Em In video slot is played using a 5 reel, 20 payline game engine that comes with 4 bonus features. Opt to play in Big Bet mode and extra wilds and wild multipliers of up to 10x are on offer. Cast off from 20p to £500 per spin.

Reel ‘Em In Bonus feature – to land this round, you need to have a spin where all of the reels include a sand rather than sea backdrop. Between 1 and 5 reels will then be activated. These reels will then land blanks which do nothing, fish which deliver an instant win cash prize or a boot which de-activates that reel. Once you’ve completed all the active reels, the prizes are added together and you return to the base game.

If you fancy spicing up your action you can opt to play in Big Bet mode. This is a series of 5 linked spins that cost more but offer some tasty extras in return. Goodies on offer include extra wilds added to reels 3, 4 and 5, a Big Bite Bonus feature where a shark adds 2x multiplier wilds or a Mega Bite Bonus feature where wild multipliers of 2x, 3x, 4x, 5x and 10x are added to the mix.

As usual with Barcrest’s Big Bet play, the return to player rate increases markedly. Play at stakes of under £2 per spin and the RTP is 94%. At £2 and above, its 96%. In Big Bet mode, it increases to 98%.

Reel ‘Em In Lobster Potty isn’t the most exciting game you’ll come across. The features are solid enough but didn’t really set our pulse racing. There’s little in the way of interactivity on offer here let alone any free spins. If you have the bankroll for it, the Big Bet mode can certainly spice up the action a little. Reel ‘Em In Lobster Potty didn’t really rock our boat – I much preferred NetEnt’s Lucky Angler which has a similar theme.