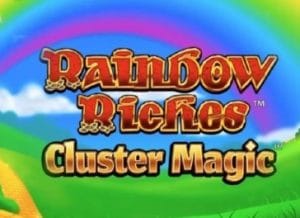 Barcrest is back with more lucky-leprechaun-inspired mayhem in the Rainbow Riches Cluster Pays slot. This latest instalment in the hugely popular franchise is a little different in that it’s played using a cluster pays game engine. Look out too for cascading reels which expand the size of the reels as well as 3 different free spins features that comes with an assortment of wild and multiplier extras. The other slots in the series have been hits. Does this one have the same magic? Find out in our detailed Rainbow Riches Cluster Magic review.

The Rainbow Riches Cluster Magic slot plays out on an 8×8 grid. To start, only a 4×4 block in the centre of the grid is unlocked. Land a cluster of 5 or more matching symbols or wild vertically or horizontally and you’ll form a winning cluster.

You can play the game at stakes of between 20p and £200 per spin. You can set autoplay of up to 100 spins here, complete with adjustable win and loss limits.

The set-up is very simple and straightforward to use. As is the paytable which shows money rather than coin payouts. The RTP here isn’t enormous at 96.01% but its respectable enough.

When it comes to volatility, Rainbow Riches Cluster Magic is in the middle often fairly frequent wins of all sized. The bigger wins come in the Free Games feature as you play on a fully expanded 8×8 grid and can benefit from persisting wilds, wild magic or infinity games. In the latter, its much more likely to achieve the maximum win of 12,500 x stake per spin.

Pick me rounds and precious little else have been the staple feature for many a lucky leprechaun-themed slot. You can expect something rather more expansive than that when you fire up Rainbow Riches Cluster Magic. There’s the cluster pays game engine, cascading, expanding reels and free spins galore.

Land a winning cluster and those symbols are removed and a cascade follows with new symbols dropping in to replace them. A cascade also unlocks previously blocked positions on the reels which means you’ll have more spaces open to create a new winner. Each successive cascade win opens more spaces.

The Free Games feature is triggered if you get on a roll and land 6 successive cascade wins in a row. You’ll then spin a bonus wheel. Depending on where the pointer lands, you’ll get to play one of the following extras. They each offer 8 free spins on the expanded 8×8 grid.

If you don’t like what you’ve been offered, you can try and Re-Roll. This spins the wheel again and gives you a chance to land another feature. You could end up with the same again though.

If you triggered the Wild Magic free spins, there’s not charge for a Re-Roll. If you originally landed the Infinity Games or Persisting Wilds free spins, the fee is 5x or 8x your total bet respectively. Here’s what you can expect from the 3 extras:

Persisting Wilds: 2 wilds are added each time you land a winning cascade. On any single set of cascades, you can land up to 12 wilds. Get on a roll with 6 or more cascades and you’ll get another 8 free spins. Following a winless cascade, the wilds are removed from play and the reels revert to their starting state.

Infinity Games: the free spins here start at 1x. That increases by 1 with each successive cascade win. There’s no limit as to how high this multiplier can go. Following a winless cascade, the multiplier drops to its standard 1x. Each winning spin (that’s spin, rather than cascade) adds 1 more free spin to your total with a maximum of 250 free spins up for grabs. A minimum prize of 10 x your bet is awarded in this feature.

Wild Magic: boosting your chances here are between 4 and 16 wilds which are added on each free spin. Land 6 or more cascades in a row for 4 more free spins. Many slots that star smiling leprechauns have a simple, rather old-fashioned look. There’s simplicity in the design of Rainbow Riches Cluster Magic but the visuals are bright, glossy and very sharp.

There’s not much of a soundtrack in the base game but the Irish rock amps up when you trigger the Free Games feature. Some previous slots in the series have been rather basic visually. This is a step up.

Joining the 4 lower value gemstones are a toadstool and the lucky leprechaun. Land a minimum 5 of him in a cluster for an award equal to your total bet. If you’re lucky enough to land a cluster of 10 or more this rises to 250 x your bet. There’s also a wild, the pot of gold, that substitutes for all symbols.

Clear imagery is a requirement in a mobile slot with so many moving parts and they’re very nicely done in the Rainbow Riches Cluster Magic mobile slot. There’s nothing too flashy here but the colourful design works very nicely, even on the smaller screen devices.

This latest addition to the Rainbow Riches series offers something different. The visuals have been given a welcome makeover and there’s a freshness about the gameplay too. Rainbow Riches Cluster Magic is a million miles away from the original Rainbow Riches slot that has become one of the UK’s most popular slots ever.

If you’ve wanted to play a leprechaun slot that offered something more than cash trails and pick and click bonuses, Rainbow Riches Cluster Magic could be just what you’re looking for. Another alternative is the Rainbow Riches Megaways slot which encompasses the original game but with the popular Megaways engine. If you’re looking for cluster pays slots, Big Time Gaming’s Star Clusters Megaclusters is highly recommended.

❓ What is the Rainbow Riches Cluster Magic RTP?

The Rainbow Riches Cluster Magic return to player rate is 96.01%. That’s about average. On average, for every £100 wagered, £96.01 is returned via the prize pool. Medium variance, you should get a steady stream of wins.

🥇 What is the Rainbow Riches Cluster Magic max win?

The maximum payout is 12,500 x bet per spin in the Rainbow Riches Cluster Magic slot. This can be won when you expand to the grid to 8×8 in size. In the Free Games feature, you can also get increasing multipliers to help you win bigger.

🎰 How does the cluster pays game mechanic work?

In a standard slot, winners are usually formed by landing matching symbols in the same payline or on adjacent reels. In a cluster pays slot, you’ll form a winning combination by landing a vertical and/or horizontal block of 5 or more matching symbols or wilds. The top cluster here pays 250 x your bet.

As well as cascading reels, Rainbow Riches Cluster Magic is all about the Free Games feature where you play with 1 of 3 randomly chosen extras. They all begin with 8 free spins but offer persisting wilds, added wilds or increasing multipliers.