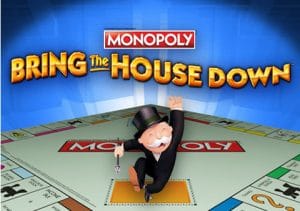 Monopoly Bing the House Down: Demo

WHERE TO PLAY Monopoly Bing the House Down SLOT

Cartoon property baron Rich Uncle Pennybags gets another outing, this time in Monopoly Bring Down The House. Powered by Barcrest, it’s a feature-heavy, 5 reel, 40 payline video slot that comes with special Hot Zones that can bring wilds and multiplier wilds into play. Also on offer are free spins and Big Bet modes where a host of modifier extras become live. Build your property empire from between 10p and £500 per spin.

Monopoly Bring Down The House is a glossy looking game which is just what we’d expect having seen the other games in the series. The reels feature the usual collection of lower value playing cards as well as a quartet of tokens from the game. You’ll see the ship, car, dog and cat spinning around the reels. Best of these standard symbols is the cat which pays up to 80 coins per payline.

The other Monopoly-themed video slots have been packed with features and the same is true of Bring Down The House:

Hot Zone and Wild feature – look out for the special patterns that spin in addition to the reels. If a green house symbol lands on the Hot Zone pattern at the end of a spin, it will turn into a wild.

Hotel Upgrade feature – as anyone who has ever played Monopoly will know, hotels are more lucrative than houses. That’s the case in this game too. You can be awarded hotel upgrades at random – as well as becoming wild, the hotel will also boost the payout with a multiplier of up to 5x.

Free Spins feature – land the Monopoly logo symbol on reels 1, 3 and 5 and you’ll trigger the feature with a random amount of free spins. Any wilds, house or hotel, that land during the free spins will be locked in place for the remainder of the feature.

Chance Card feature – this is triggered at random. You’ll be given the pick of 3 Chance cards. These will reveal a Hot Zone pattern which is then dropped onto the reels, giving you the chance to find wilds and multipliers on the spin that follows.

Bonus Selector feature – this too can land randomly prior to any spin. Here a Hot Zone is dropped into play – you can choose whether to collect or pass and potentially wait for another Hot Zone. When you collect, that Hot Zone is in play, offering the chance to build houses and hotels.

Bonus Drop feature – if a Hot Zone pattern falls entirely outside the reels, it will then will drop onto the reels and become live. As usual, you’ll have the chance to land wilds and multipliers.

One of Barcrest’s regular extras in Big Bet feature – this series of 5 linked spins costs extra but there are some tidy rewards on offer for your added investment. Pick from the Community Chest cards to win 1 of the following modifiers: instant cash win, guaranteed winning spins, extra spins, hotel upgrades with 2x, 3x, 4x and 5x multipliers, locked wilds and lower value symbols removed from play.

Like most branded content, Monopoly Bring The House Down has a glossy look. It’s not the most dynamic in terms of visuals but the design is good enough.

Central to the action here are the Hot Zone patterns which offer a little something different, especially for a board game-themed video slot where cash trails usually dominate. It can take a little time to get used to the concept so some spins in demo mode are recommended.

Once you have got used to the slightly unusual features, there’s much to get stuck into here. Expect plenty of action and the Hot Zones to come into play at regular intervals. This is certainly something of a departure for a Monopoly-themed video slot. If you’re a fan of the original game then Bring The House Down is worth closer investigation – I also suggest you try Super Monopoly Money by parent company WMS Gaming.