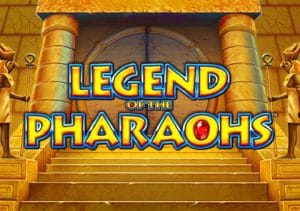 Legend of the Pharaohs: Demo

WHERE TO PLAY Legend of the Pharaohs SLOT

Ancient Egypt is the setting for Legend of the Pharaohs, a 5 reel, 20 payline video slot from Barcrest. Treasures on offer in this trip to the land of the pyramids include free spins complete with colossal symbols, high value symbol spins, wild reels and frozen wild symbols. Play on your desktop, tablet or mobile device from between 20p and £500 per spin.

The visuals in Legend of the Pharaohs are typical Barcrest – a pair of ornate columns flank the reels which include the usual selection of lower value playing cards and Egyptian hieroglyphs. They’re joined by a wild and scatter.

3 or more pyramid symbols anywhere on the reels on the same spin unlocks the Free Spins feature and with it, 10 free spins plus bonus modifier extras. 3 scatters and it’s 1 bonus modifier. 4 scatters and you’ll get 2. A full 5 and its 3 bonus extras. They are as follows:

Colossal Symbols – a giant 3×3 symbol is added to the reels here. This is chosen at random and remains in play until the feature ends or you trigger another bonus extra.

Win Eliminators – starting with the 10 symbol, the lowest value symbols are progressively removed from the reels. It’s possible that you’ll get the reels to spin without the 10, J, Q, K or A symbols, making it that much easier to create a higher value combination.

Wild Reels – 1 reel will turn wild for the duration of the feature.

Wild Symbols – a symbol is chosen at random. Whenever it lands during your 10 free spins, it will transform into a wild.

Hope to see the red pyramid symbol drop into view as you’ll be offered a retrigger with 1, 2 or 3 bonus extras. If you don’t like the number of free spins awarded, you can gamble and try and exchange the offer.

Like many Barcrest video slots, you’ll also have the chance to play in Big Bet mode. This is a series of 5 linked spins that offer some special extras. Here are your options:

£20 Big Bet – any pyramid that lands during your linked spins lights up an icon above the reels. Collect at least 3 lights and you’ll be awarded 5 free spins. Each pyramid landed after the third adds an extra 5 free spins to your tally.

£30 Big Bet – the pyramid light free spins are in play here. You’ll also get to spin the Pharaoh’s Bonus feature wheel if you land 2 feature symbols here. The wheel is split into 4 segments – 2offer a cash prize, 1 trigger the free spins round and 1 sends you back to the base game.

£40 Big Bet – this is the same as the £30 offer except you’ll get to spin the Super Pharaoh’s Bonus feature wheel. The portion of the wheel that triggers the feature is larger here. The cash amounts on offer increase too.

£50 Big Bet – this most expensive option offers the Mega Pharaoh’s Bonus feature. The feature segment of the wheel is bigger still and the cash prizes rise again.

The RTP rate improves if you play in Big Bet mode, rising from 96.10% up to 98.10%. It’s not a cheap option though so make sure you have enough funds.

Ancient Egypt is among the most popular destinations for slots players- while the visuals aren’t the most impressive you’ll see, the feature round extras make Legend of the Pharaohs worth a closer look. The free spins round offers plenty of potential if the bonus extras fall nicely.

Get lucky with the extras and this trip to the land of the ancients could deliver plenty of hidden desert treasure. If ancient Egypt is appealing, there are plenty of options available with Quickspin’s Phoenix Sun and Play ‘N Go’s Leprechaun Goes Egypt recommended.