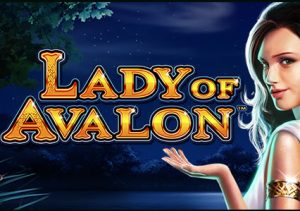 WHERE TO PLAY Lady of Avalon SLOT

Arthurian legend (but minus Arthur himself) is the theme on offer in Lady of Avalon. This slice of English mysticism comes from Barcrest and is played using a 5 reel, 10 payline game engine. Top of the bill as far as feature go is the bonus round that awards free spins where a special symbol can fill whole reels when it forms a winning line. Play on your PC, tablet or mobile device from between 10p and £500 per spin.

Barcrest has kept things very simple here. That’s the case with both the design and the gameplay. The moonlit island of Avalon forms the backdrop to the action. On the plain blue reels you’ll see Barcrest’s usual lower value A to 10s as well as a quartet of more rewarding symbols that relate to the legendary theme.

The Lady of Avalon is both the wild and the scatter. As well as substituting for all of the standard symbols she also triggers the game’s Free Spins feature. Land 3, 4 or 5 of the Lady of Avalon on the same spin and you’ll receive a payout of 2, 20 or 200 times your bet. You’ll then receive 10 free spins.

Before the round begins, 1 of the standard symbols is randomly selected. If a special symbol lands on a reel and creates a win, all other instances of this symbol will expand to fill the reel. You could see some big clusters of matching symbols here. If they’re a high value symbol, then some cracking action is possible.

Hope to see the Lady of Avalon during the free spins too. Find 3 or more of them on the same free spin and you’ll see 10 extra free spins added to your tally. There are no limits too!

That’s it as far as gameplay goes. This really is a very simple game. There’s an almost primitive look to the visuals. The stirring orchestral score is very good though. If you’re after plenty of extras and features then look elsewhere. Barcrest has kept the gameplay as stripped back as the design.

It might be a little vanilla for some tastes but if you manage to find a higher paying expanding symbol in the bonus round, then an audience with the Lady of Avalon can be an enticing prospect as you can win 5,000 times your bet on every free spin. You may recognise the game engine – that’s because it’s identical to that of Novomatic’s Book of Ra Deluxe.