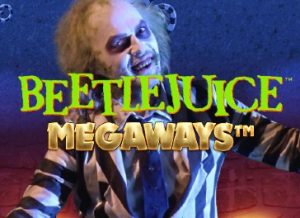 WHERE TO PLAY Beetlejuice Megaways SLOT

Based on the hit 1988 movie that starred Michael Keaton as a mischievous poltergeist, Beetlejuice Megaways is the latest branded slot from Barcrest. Played using the Megaways game mechanic, the number of ways to create a winning combination can reach up to 248,832. Look out to for cascading reels, transforming symbols and a bonus round that awards free spins complete with an expanding multiplier. The movie version of Beetlejuice gained cult status. Will the slot adaptation? Find out in our Beetlejuice Megaways review.

You can usually expect plenty to be going on when you fire up a Megaways slot. That’s certainly the case with Beetlejuice Megaways which comes with a good range of extras.

The more symbols in play, the more way to create a winner. If all the reels are fully expanded, you’ll have 248,832 Megaways active. This is called the Mighty Ways feature.

The ghost is a mystery transforming symbol. All the ghost symbols that appear on the same spin transform into the same matching symbol. This can be anything apart from the wild and bonus. A new payout calculation is made after the transformation has taken place and the matching symbols are in position.

The main feature is the Free Spins feature. This is triggered by landing 3, 4 or 5 Bonus symbols anywhere on the same spin. Your reward is 8, 12 or 16 free spins. These start with a 1x multiplier.

Each cascade win increases that multiplier by 1x. Hope to see 3, 4 or 5 bonus symbols land during the feature as it adds another 4, 6 or 8 free spins to your total. There’s no limit to how many more free spins you can win and the multiplier can rise infinitely too.

Like many slots in the Barcrest catalogue, the RTP rate varies depending on the stakes that you’re playing at. Bet at under £2 per spin and the RTP is 94%. This rises to 96% if you play at wagers of over £2 per spin.

When it comes to variance, Beetlejuice Megaways is medium to high – the max win per spin is 6,220 x your bet. This can rise with the multipliers from the Free Spins feature. There’s a cap of £250,000 from any win though.

The user interface is slightly different if you’re using a mobile or tablet device. Click on the chevrons to open up the game panel where you can check the paytable, set stake levels and autoplay. There are plenty of moving parts here and it can feel a little tight, especially when the reels are fully extended. You’ll still get the same magical atmosphere though.

If you’ve seen Beetlejuice the movie, you’ll find plenty that’s familiar in this slot version. Joining the lower value A to 10 symbols are Shrunken Head, Miss Argentina, Snake and Lydia. Beetlejuice (Michael Keaton) is the best standard symbol, awarding 50 times your bet if you land 5 on adjoining reels.

The imagery of the characters symbols is done photo-style and works very well. With up to 12 symbols appearing on each reel it can get a little packed. It’s all clear enough though, even if the drawings aren’t of the absolutely highest class.

The visuals fit with the rather anarchic comic horror theme from the film. That’s also true of the backing track which has a jaunty, fantastical quality. Again, it’s a good fit for the theme.

The game interface is simple too. Click on the ? to open the paytable. You can adjust your bet size from the game screen too without having to open up another window. Just click on the + and – arrows to raise or lower your bet. You can also set autoplay from here.

This slot version of Tim Burton’s classic is nicely done. The design conjures up a suitably fantastical atmosphere and there’s plenty going on as far as gameplay is concerned. The mystery symbols can add an extra layer to the base game while the free spins with expanding multipliers can really get things moving.  The RTP is reasonable enough too if you’re playing at stakes of £2 or more per spin.

The film version of Beetlejuice still has a devoted fanbase, despite being released over 30 years ago. The slot version probably won’t quite manage that but it’s still a very playable game, especially if you like the action that comes from the Megaways game mechanic.

❓ What is the Beetlejuice Megaways RTP?

It depends on your stake levels. At under £2 per spin, it’s a not too impressive 94%. Increase that to £2 per spin or more and it rises to a much more reasonable 96%.

🥇 What is the Beetlejuice Megaways bonus feature?

The main feature is the Free Spins feature. This awards 8, 12 or 16 free spins complete with an expanding multiplier which increases by 1x with each cascade win. There’s scope to win unlimited extra free spins.

🎰 How many Megaways can you get active in Beetlejuice Megaways?

The reels can stretch up to 12 symbols high here. At their maximum size, you’ll have 248,832 ways to create a winner.

⚡ Is Beetlejuice Megaways true to the original movie?

By and large yes. The slot version conjures a fantastical atmosphere and features many of the film’s most popular characters. The visuals are the good and the catchy soundtrack excellent.