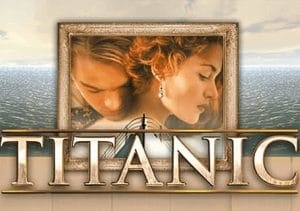 WHERE TO PLAY Titanic SLOT

One of the most popular movies in history is the inspiration for Titanic, a feature filled 5 reel, 25 payline slot from Bally Technologies. Look out for familiar visuals from the hit film alongside double wilds, mystery wilds, pick me rounds, free spins and much else besides. Take to the ocean from between 35p and £100 per spin.

The first decision to make is to decide what class of voyage you intend to make – this will in turn determine which jackpot prizes you’re eligible for. The cheapest fare is the Third Class ticket – opt for this and you’ll gain access to all 25 paylines plus the range of bonus features. Pay a little more for a Second Class berth and the Mini and Midi Jackpots open up too. Be bold and travel First Class at more than £2 per spin and you’ll have a shot at scooping the Major Jackpot as well.

There’s no shortage of action on offer in Titanic with features being triggered at random and via the more traditional scatter method. The random features that can hit in the base game include the Mystery Double Wilds feature which double any winning paylines in which they appear.

The Mystery Wild Reels feature can turn up to 2 reels totally wild for the spin that follows. Jack’s Drawing Mystery feature can hit at the end of any spin that doesn’t trigger the bonus wheel – choose from 1 of the 10 question tiles then find 3 of the same drawing to win a prize that can reach up to 2,950 times your line bet.

Finally, there’s the Jackpot Feature. Once active, pick 1 of the 3 tiles to reveal whether you’ve won the Mini, Midi or Maxi Jackpot.

To trigger the other quartet of features you’ll need to land the ship, ship wild or ship double wild on reels 1, 3 and 5. You’ll then spin the ship’s wheel to determine the bonus feature you’ll play. If you land on a number, you’ll win that amount before spinning the wheel again.

The first one we’ll look at is the Pick feature – it’s a multi-level pick me round. Find a cash value and you’ll pick again. You can boost you wins here by picking a multiplier that can boost your payouts by up to 10x.

The Safe feature is another variation on the classic pick ’em. First choose a safe from the grid to reveal a bonus prize. Then select 1 of the items in the room to reveal a multiplier which will be applied to your bonus. Up to 800 times your line bet can be won here.

There are also 2 free spin features. In the Heart of the Ocean Free Games feature you get a pick of free spin and multiplier combinations. The choices are 6 free spins at 6x, 10 free games at 3x, 15 free spins at 2x or 30 free spins at 1x. Look out for extra hearts which are added to the reels in this round which can boost your winning potential.

Finally, there are the Make It Count Free Spins feature – here you’ll be awarded 10 free spins. Keep a special eye on the clock symbol here as it can award extra cash prizes, locked wilds or even more free spins.

As you can see, Bally Technologies has packed it plenty of action into this film adaptation. They’ve not shirked on the look and sound of Titanic either. The reels are packed full of images from the multiple Oscar winning movie and include stars Kate Winslet and Leonardo DiCaprio. The soundtrack will also be familiar to the film’s legion of fans. Listen out for “My Heart Will Go On” amongst others.

We thought the film version of Titanic was a little overhyped to be honest. The plaudits won by this impressive slots version are well deserved though – it looks and sound a treat, the gameplay is smooth and the range of interactivity and features impressive. Combined they all add up to a very playable and entertaining slot.

Even if you gave the movie a wide berth, it’s well worth taking a trip on the slot version of Titanic. If you like movie-themed slots, there are plenty about with Microgaming’s Jurassic Park and Playtech’s The Avengers my favourites.