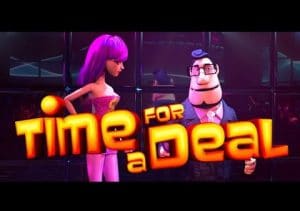 Time For a Deal: Demo

WHERE TO PLAY Time For a Deal SLOT

Like a strange hybrid of The Price Is Right, Bullseye and Deal or No Deal, Time For a Deal is a superbly designed 5 reel, 25 payline video slot from Ash Gaming. As you’d expect from a gameshow-themed game, there are plenty of potential prizes on offer here. Look out for random deals, free spins with added wilds and multipliers, a Big Deal Bonus plus a progressive jackpot. Play from 25p per spin.

The action in Time For a Deal takes place in a TV studio complete with lights and cameras – overseeing proceedings is our dapper host Roger. As well as the lower value playing cards, you’ll see an assortment of toasters, cameras, beach scenes and cars spinning around the reels. The motor is the best of these standard symbols, paying 1,000 coins if you land 5 on a payline.

There’s also a wild, the Time For a Deal logo – it substitutes for everything apart from Roger and his assistant Violet. Awards of 100, 500 or 2,000 coins are on offer if you land 3, 4 or 5 wilds in combination. There are 3 main extras on offer in Time For a Deal:

Reel or Deal feature – should you gamble or keep what you’ve already won? That’s the choice in this randomly triggered bonus feature. Roger will offer an instant win prize or a mystery spin of the reels. Do you feel lucky?

The Big Deal Bonus feature – this round is triggered when you see Violet on reels 1, 3 and 5. First choose from the 3 doors shown to reveal a silver or gold coin. You then go on to spin the Big Deal Slot Machine whose reels are made up of multipliers. You’ll get to spin 3 reels if you found a silver coin. With a gold coin, it’s 5 reels. The multipliers are then combined and applied to your triggering spin bet.

Watch out for Roger who can make a cameo appearance here and doubled or treble your win. He can also offer you an extra spin of the Big Deal machine. Time For A Deal also offers a chance at winning a progressive jackpot – hope to see 3 stars fall into position.

Free Spins feature – land Roger on reels 2, 4 and 5 on the same spin to activate this round. Pick from the stars, crosses and arrows to reveal a new wild symbol, a multiplier, up to 5x, and the number of free spins you’ve been awarded. This can reach 25 free spins. The free spins play out with the accumulated modifiers. Once again Roger can appear at the end of the round and offer a deal. Keep what you’ve already won or gamble for the mystery prize.

Ash Gaming has created a fine-looking game here as the glossy, 3D visuals are very nicely done. There’s plenty of action and interactivity on offer from the range of features too. We found them quite tricky to come across but did well when we did find them.

With its high-end design and nice range of extras, Time For a Deal is a very playable video slot. The theme may be a little cheesy for some but the bonus rounds make this gameshow-themed title well worth watching. Saying that, I’d much rather play some of Ash Gaming’s more hard-hitting slots with Full Moon Fortunes and Nostradamus Prophecy recommended.