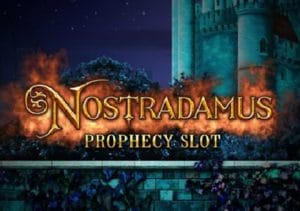 WHERE TO PLAY Nostradamus Prophecy SLOT

Nostradamus Prophecy is an Ash Gaming-powered video slot with 5 reels and 243 ways to win. Available only on desktop devices, it can be played from 25p to £50 a spin. The game is based on Michel de Nostredame who is famous for publishing collections of prophecies ways back in the 16th century.

The game has a French feel as there’s an old 16th century castle in the background. Superbly designed, symbols on the reels include telescopes, book of prophecies, timers, quills and Nostradamus himself. When it comes to bonus features, there are 3 to benefit from.

First up is the Planets Bonus feature which is played when you get the planets bonus symbol simultaneously on reels 1, 3 and 5. You will see the planets orbiting the sun – when a planet stops on the win line, it will reward you with the multiplier value displayed next to it. If you’re lucky, all 6 planets can line up to give you 6 multiplier prizes which are then applied to your stake. I’ve managed to win over 500 times my stake here!

When a reel modifier is enabled, it will remain active for 5 free spins. Furthermore, all modifier symbols become wilds for the duration of the feature. Here’s a description of the reel modifiers and how they can benefit you:

Earthquake Reel Modifier – after each free spin, aftershocks cause random reel symbols to fall away with enhanced symbols replacing them. This increases your chances of more rewarding winning combinations.

If you manage to get 15 free spins with all 3 reel modifiers, your winnings can be astronomical (excuse the pun). If you had to choose one, I would pick the Tsunami option as 3 wild reels per free spin is too much to turn down.

Lastly, there’s the Nostradamus Predictions feature which is played when a scroll, randomly, unrolls during the base game. Nostradamus then rewards you with 1 of 3 options. A random multiplier is applied to your wins (up to 10x is my highest), a reel modifier (Earthquake, Tsunami or Lightning) will be awarded on your current spin or a cash prize is awarded.

Nostradamus was certainly ahead of his time with his predictions but the slot version is a medium to high variance game which can give you huge wins. Aesthetically superb, I found the Free Spins Bonus feature to be the most rewarding feature due to the possibility of all 3 reel modifiers for 15 free spins – saying that, don’t expect to win much most of the time. You need patience. I also recommend you try other Ash Gaming titles such as the highly volatile Full Moon Fortunes which is one I predict you’ll love.