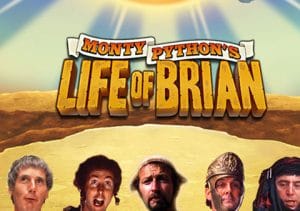 WHERE TO PLAY Monty Python’s Life of Brian SLOT

Will you be able to “Look on the Bright Side of Life” after a good session spinning Monty Python’s Life of Brian slot? Based on one of the 20th century’s most infamous (and entertaining) films, it’s a feature filled slot from Ash Gaming that comes with 10 bonus features! Join the Judean People’s Liberation Front (or should that be the People’s Liberation Front of Judea) from between 30p and £300 per spin.

The famous film’s anarchic feel is evident in the look and sound of the slot adaptation – symbols on the reels include low value playing cards alongside the jailer, Mr Cheeky, the centurion, Pontius Pilate, Brian’s mum and of course Brian himself who awards 1,000 coins for a 5 symbol combination. The Life of Brian logo is the wild, substituting for all symbols bar the scatter – it too offers payouts of up to 1,000 coins. Look out for clips from the film and snatches of dialogue that accompany winning spins.

There are a quartet of bonus features that are triggered by landing the bonus symbol on reels 1, 3 and 5 and offer prizes that can top 1,000 times your stake. Spin the wheel to determine which 1 you’ve been awarded alongside a cash prize or multiplier which will be applied to your selection.

In the Stoning Bonus feature, choose a stone and throw it at 1 of the characters in the line up to win a cash prize. Keep an eye on the official who may get a little twitchy and give you the chance to don a beard and win another prize. The throws keep on coming until you land the big rock.

In the People’s Liberation Front of Judea Bonus feature you get to answer the question “What have the Romans ever done for us?” Cash prizes are awarded as you choose your answers.

Help Brian daub anti-Roman graffiti on a wall in the Romani Eunt Ite Domum Bonus feature. Cash prizes are awarded as Brian paints his slogans. The more he splashes on, the more you’ll win.

Head to lisping Roman governor Pontius Pilate’s palace in the What’s So Funny Bonus feature. It’s another variation on the pick me round where you get to choose 1 of the Roman guards. The longer they manage to stand without falling about laughing, the better the prizes on offer.

Other goodies on offer include the Wild Spaceship Re-spins feature which can hit on any unsuccessful spin – Brian will fall through the reels and be collected by the spaceship and in the process turn a reel stack wild. The reels will re-spin with the extra wilds in place and will keep on spinning with more wilds added until you land a winner.

You’ll notice that we haven’t mentioned any free spins yet – well don’t panic, they are available. Land the free spins symbol on reels 2, 3 and then pick from the members of the Judean People’s Front Crack Suicide Squad which will decide how many free spins you’ve awarded. There’s also a dynamic multiplier on offer in the free spins which increases by 1 after every losing spin and can top 10x.

There’s another extra available at the end of the free spins in the form of the trigger the Crucifixion Bonus feature which is triggered by landing 3 scatters. A cash prize, extra spins with your current multiplier intact or a complete re-trigger of the spins are the prizes on offer here.

And if all that wasn’t enough there’s also a potential progressive jackpot on offer – look out for the giant Monty Python Foot of God which can stomp on the screen at random following any spin, winning or otherwise. Choose a sandal, gourd or juniper bush and you’ll be in line for a cash prize. You can also choose from the People’s Front of Judea, the Judean People’s Front or the Popular Front of Judea. If you’re really lucky, the Foot can deliver the big progressive jackpot.

As you’d expect from a film adaptation, Monty Python’s Life of Brian is a glossy affair as far as look and sound go. Ash Gaming certainly hasn’t scrimped on the features either and this slot is dripping with them. If you enjoy plenty of variety in your play, then you’ll find plenty to partake in here. The extras come along at regular intervals with the variance in the medium range.

Python fanboys will find plenty to enjoy here of course but even if the Cleese, Palin and company’s surreal brand of humour leaves you cold there is more than enough gameplay on offer to make Monty Python’s Life of Brian well worth a play. If you like slots based on films, there’s plenty about with Microgaming’s Jurassic Park a must.