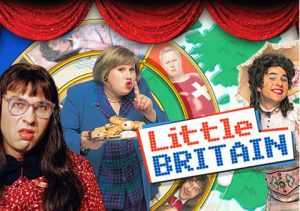 WHERE TO PLAY Little Britain SLOT

Little Britain is an Ash Gaming-powered video slot that has 5 reels and 30 paylines. Based on the infamous TV show starring David Walliams and Matt Lucas, it features all the popular characters (these include Dafydd, Andy and Lou and Vicky Pollard. As a result, the game contains 5 bonus character features, a free spins feature and an in-reel feature. You will also notice that the voice of Tom Baker narrates as you play. Finally, Little Britain suits all pockets as you can play from 30p to £300 a spin.

Vicky Pollard’s ASBO Bonus feature sees you choosing activities for Vicky to do. The longer she takes to decide, the better the cash reward you’ll receive. She can go joyriding or go to prison amongst other things but keep an eye out for speech bubbles as they can reward you with another pick (for more cash prizes). If you’re lucky, you can win up to 750 times your stake.

There’s the Big Gay Bonus feature where you shuffle 3 times to help Dafydd get dressed to attract other gays. Completing a costume will reward you with a cash prize. You can get more shuffles but the top prize available is a cool 500 times your stake.

You have Marjorie Dawes’ Fat Fighters Bonus feature – here you select silver trays to reveal food underneath. Unhealthy and fatty foods fill up the calorie meter. When the meter fills up, the feature ends. Look out for low fatty foods such as dust to get cash prizes (dust also reduces the calorie meter). Top prize is 500 times you stake.

However, my favourite is Lou and Andy’s Love It Bonus feature. You choose objects for Lou to hand to Andy. Objects win you cash prizes but if Andy likes it, the cash prize will increase. Once Andy discards (doesn’t like) 3 objects, the feature ends. The top prize is the largest at 1,000 times your stake on offer.

I’ve managed to play all the 5 character bonus features and Lou and Andy’s feature is the most appealing as it has the biggest top prize on offer. However, Vicky Pollard’s feature was the funniest and most appealing to me. The average win is about 35 times your stake – I’ve managed to win just over 100 times my stake though on a couple of occasions.

Then you have the Free Spins feature which you can activate by obtaining 3 Little Britain free spins symbols on reels 2, 4 and 5. You will receive 10 free spins but the feature has special character stacked wilds – these can really up your return as up to 100 times your stake can be won from a single stack! The average win in this feature is approximately 32 times your stake.

Then there’s the Anne’s Wild Bonus feature which is activated randomly. When Anne makes an appear on the reels, she can throw objects at certain symbols and turn them into wilds. This feature won’t be triggered often at all but can give you big wins when she does finally appear.

The Little Britain slot game is entertaining and also quite funny. If you’re a fan of the television series, you’ll love this game. You will get plenty of low value wins though with the bigger wins coming from the bonus features. When a slot game has lots of bonus features, it tends to suggest it’s a low variance one.

Well, it is and for that reason is not a game I will be playing – I much prefer Adventures in Wonderland (also by Ash Gaming) or Game of Thrones by Microgaming. Ash Gaming is owned by Playtech so you can play much better Playtech slots with the Marvel games being much more appealing – try The Avengers which is simply superb.